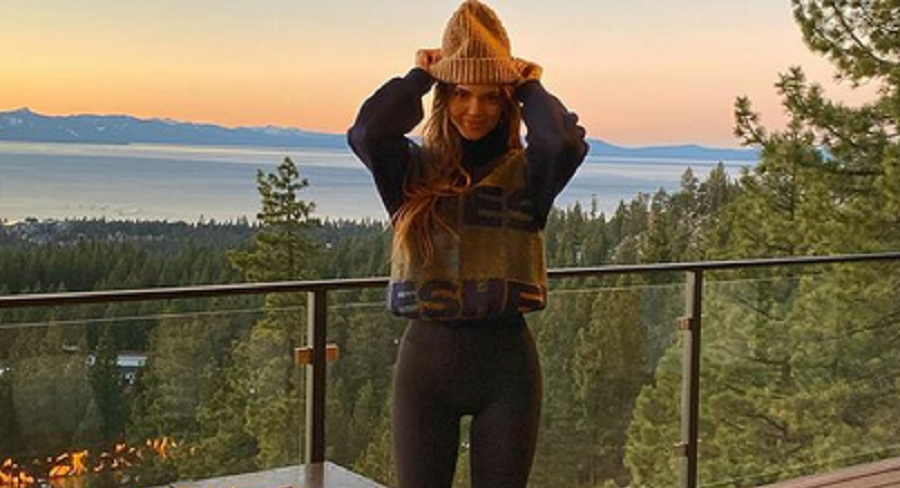 Kendall Jenner tried to melt the snow. She joined the Kardashian-Jenner family on their trip to Lake Tahoe, California. Each of the family members has shared photos from their sexy photoshoots. Kim Kardashian made jaws drop with her bikini photos.

Now, Kendall is the next to wear a skimpy bikini. She joined Kourtney Kardashian for a late-night dip in their hot tub. The two also enjoyed some drinks. Then, Kendall decided to show off her bikini body in the snow.

Her latest snap had fans talking about her thigh gap. As TV Shows Ace previously reported, Kendall showed off her thigh gap while working out at the gym.

The Keeping Up With the Kardashians star stripped down to just a pink bikini. However, that photo was only on her Instagram Stories. Kendall Jenner took to her Instagram feed to post three photos of herself wearing a short jacket with leggings and black Doc Marten boots. Her long legs and small thighs were on display in the photos. In the caption, she called herself  “🕷 girl.”

“I genuinely wonder what it feels like to not have your legs touching when walking or standing,” one fan pondered in the comments section. “Like her legs just don’t touch.”

But one guy fell in love with Kendall’s look. He boldly asked: “Will You Marry Me?!”

While the supermodel slipped into a comfy outfit, it didn’t stop her from showing off her incredible body. “Them legs” is all one fan could think of commenting on. Another added: “Would not know how to act if I looked like this.”

Kendall continued to show off her incredible body on her family’s Instagram Stories. Kourtney shared this photo of the duo lounging in the hot tub. The famous sisters also enjoyed one of their favorite holiday alcoholic drinks. She also shared this photo of Kendall rocking her pink bikini, snow boots, and fur hat in the snow.

The Kardashian-Jenner clan are still on their vacation

As previously reported, the Kardashian-Jenner clan spent three days and counting in Lake Tahoe, California. They rented a mansion and are reportedly filming the final season of Keeping Up With the Kardashians. The reality series will come to an end sometime in 2021. The ladies used the picturesque surroundings as the backdrop for their streamy photos.

However, it’s not as fun as it looks. The family got backlash for traveling amid the coronavirus pandemic. Currently, Southern California is on lockdown.

“They had some of the kids with them and they all played outside and sat by the fire and roasted marshmallows,” an insider told E! News. “They also went ice skating on a private rink. They enjoyed a hot chocolate bar and had big fireworks over the lake at night.”

What are your thoughts on Kendall’s steamy bikini photos? Sound off below.

Lindsie Chrisley Snubs Todd On Father’s Day 2021
Netflix Reveals If It Will Save ‘Manifest’ From Cancelation
‘Bering Sea Gold’ Exclusive: Shawn Is Dead in the Water
Which ‘RHOC’ Alum Could Return As ‘Friend’ Of The Housewives?
What Does Jacob Roloff Do For A Living & Does He Still Live In A Van?