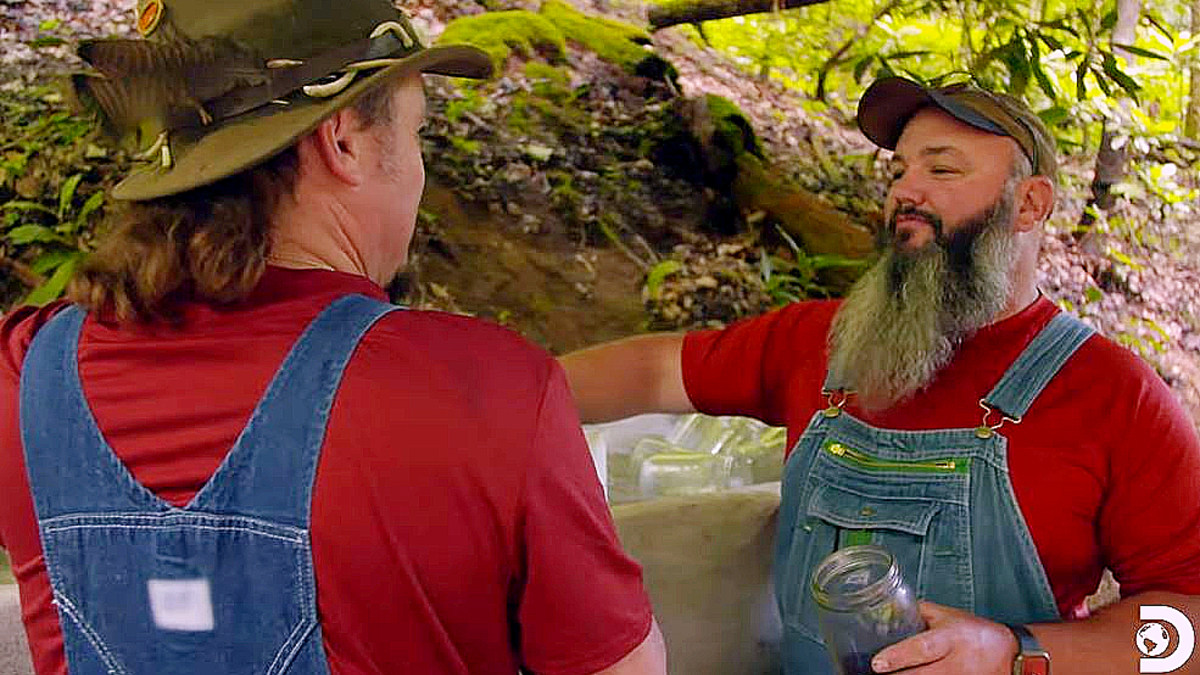 On tonight’s Moonshiners—the Discovery series that takes us into the hollers and Appalachian foothills where a band of merry men make the high proof shine that is pretty much illegal—we catch up once again with Mike and Jerry who are doing their very best to not blow themselves up.

If you remember our TV Shows Ace exclusive preview from last week, Mike and Jerry’s moonshine Frankenstein still, quite brilliant in the final build, turned on its creators and started leaking.

Which is fine if the liquids seeping out weren’t high-proof alcohol that will ignite at the tiniest spark or worse, blow up the entire still killing or maiming these two. It does happen, y’all.

Also on tonight’s episode, after decades in the backwoods, mountain man Mark Rogers enlists his dad to run with him for the first time. And with his partner in COVID quarantine, Digger has much more on the line than shine.

Mike and Jerry get into the blackberry flavors

Blackberries are harvested and the excess fruit harvest is the flavoring agent that these two men have set upon to flavor the shine. The powerful alcohol will disintegrate the berries inside the jar netting a tasty “blackberry cobbler” styled shine, one these two know will sell well. It’s an interesting process to watch.

As he plans to get the jars about one thirds full of berries, Mike says: “I’m ready to get these blackberries in them jars what about you?

Impatient for the end product, Jerry says: “I’m ready to taste it.”

Mike notes that they are a long way from tasting it and says “Hey, don’t count your damn chicken before they hatch.”

In a separate interview, Mike says: “Today me and Jerry, we’re gonna do our blackberry run and our new steel we had a bad leak problem when we first fired it up.”

As he lights the ignition it erupts into a furnace flame. He checks to see if he still has eyebrows and says: “There it is, boy I think that we’ve got them fixed now…all we can do man just load these jars up with blackberries and see how this thing runs.”

As Mike is popping blackberries in his mouth, Jerry says: “Easy now let’s get the jars full and you can eat all you want you will make yourself sick.”

Explaining how the mash will transform the fruit, he adds: “Once this mash and steam transfers into these jars with these blackberries it’s just going to start liquefying them turning them into good juice. It’s just going to keep transferring all the way up till hopefully we’ve got some good blackberry flavored moonshine.”

Jerry is nervous about it all and ponders the financial aspects. He says: “I want to get a good run out of this thing man… I mean our season counts on what we got going on here.”

They check the still and feel the heat rising up the metal core center, and note how hot it is, meaning the still is moving the heated mash around and the vapors are condensing.

And as we watch the jars start to magically fill up with liquid as the berries are disintegrating in front of our eyes.

In our clip below, Mike wins the award as he is covered in blackberry juice and says: “Somebody’s gonna think we’ve killed some down body after we get through this ”

Tune in tonight to see how they fare and how much of a yield the two come up with in the great blackberry cobbler run: