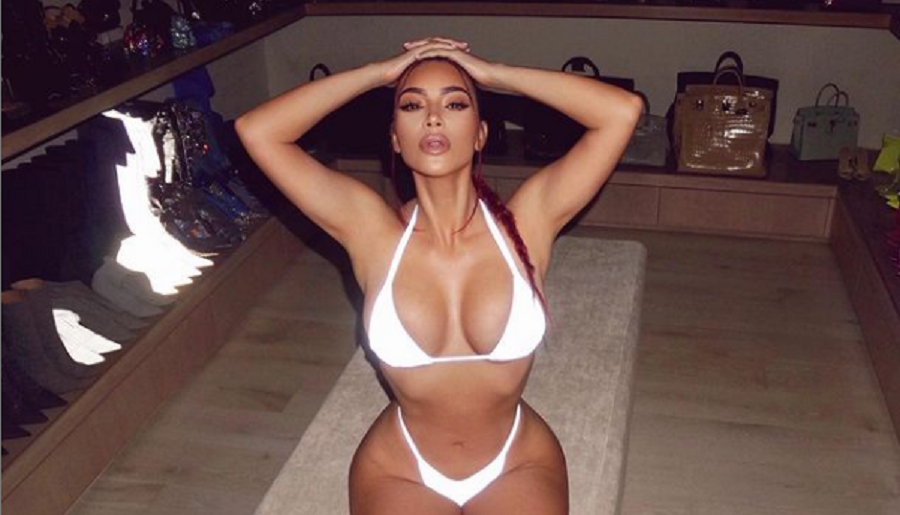 Kim Kardashian managed to find the world’s tiniest bikini. Yesterday, the Keeping Up With the Kardashians star put her curves on display. Her bikini barely covered her assets in her latest photoshoot. Currently, she’s spending time with her family in Lake Tahoe, California.

Throughout the weekend, Kim and her sisters have been sharing photos from their snowy trip. The beautiful setting has been used as a backdrop for steamy selfies and sexy photoshoots. Kylie Jenner has been sharing plenty of her own photos as well. Kim nearly had a wardrobe malfunction while relaxing in the hot tub.

See why fans are in shock over her latest photo.

On Monday, December 7, Kim Kardashian post two new bikini photos. The SKIMS founder wears a forest green string bikini as she lounged in the jacuzzi. “Always find your light! ✨,” she captioned the photos. The bikini left little to the imagination as her body was on display.

However, some would think that her bikini bottoms were a bit too tiny. She could have suffered a wardrobe malfunction on Instagram. Many of Kim’s friends flocked to the post to comment on her body.

However, fans were more focused on the lack of material. Some were concerned that it could have caused a wardrobe malfunction. Others wondered how Kim felt comfortable in the two-piece. It’s not a practical solution for bathing or swimming.

“That bathing suit covers nothing – her v** is basically completely out in the 2nd pic,” one fan wrote.

“Kim looking fab, but can we talk about the fact that those bikini bottoms look like a face mask?” a second fan commented.

She wore a dress with her face on it

The steamy bikini photos come after Kim Kardashian shared a very meta photo of herself. In a series of three photos, the reality star wore a strapless dress with her face on it. The dress featured a high slit and a long train. In the caption, Kim told her fans that it was part of her “Birthday Collection Photoshoot.”

She finished off her look with lavender eye shadow and a nude lip. She wore her brown hair straight and parted in the middle. Kim said that lavender was always favorite color, which is why she chose to wear it in the shoot. She took the photos as part of her KKW Beauty collection.

The famous family spent three days taking photos and sharing their sexy winter outfits. Kim Kardashian and her family has already gotten backlash for traveling during the pandemic. But the negative attention hasn’t stopped them. While most of Southern California is on lockdown, the Kardashian-Jenner clan rented some property to film the scenes for the final season of Keeping Up With the Kardashians.

The source also claims it’s been a low-key affair. The family has spent most of their time playing with the kids. Either they will roast marshmallows by the fire or play in the snow. They’ve also “went ice skating on a private rink” where they would eat chocolate and watch fireworks over the lake.

An insider told E! News that they “spent three nights at Edgewood Tahoe filming for the show.” As fans know, the show will end in 2021. What are your thoughts on Kim’s bikini photos? Sound off below.