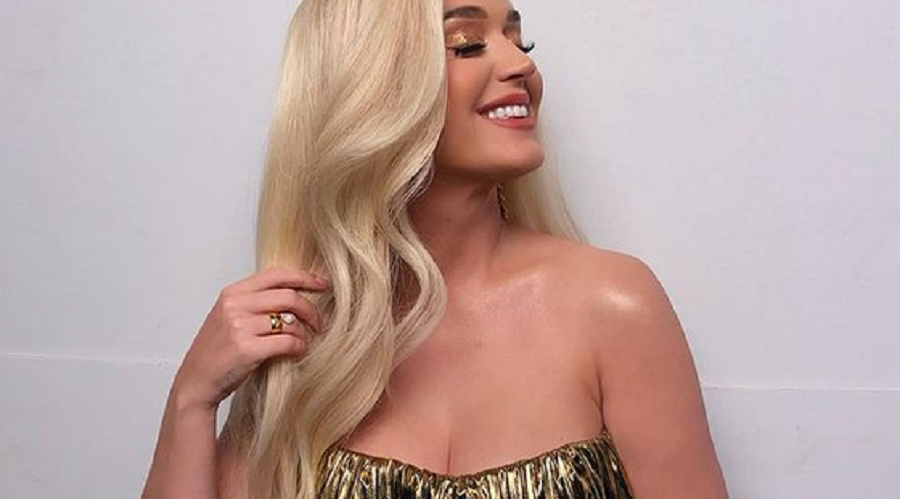 Katy Perry has made a bold return to Instagram. She shared a series of glamorous photos on Sunday, December 6. She rocked a gold strapless, low-cut dress that showed off her cleavage. The look perfectly complemented her blonde hair.

The American Idol judge is a busy mom these days. But she’s ready to take social media by storm once again. In August, Katy gave birth to her baby girl, Daisy Dove. Not only is Katy back on Instagram, but she’s also on TikTok.

Read on to check out her hot new looks.

On Sunday, Katy Perry took to Instagram to post a series of sizzling photos. She looked like a golden goddess. The singer wore a gold dress with matching gold jewelry. The “What Makes a Woman” singer also had flicks of golden eyeshadow on her lids.

“M🤎THER” she wrote alongside her glamorous photos.

The official account for American Idol commented, “Wow, Mom!!!” Katy had her cleavage on display. The photos came after she flashed her Spanx on TikTok. The pop star got a little cheeky while trying on another glamorous look. While Katy clearly looks good, she admits she got a little help.

On Sunday, Katy Perry shared a hilarious clip on TikTok. It was a play on her song “What Makes a Woman.” In the clip, Katy performed a runway walk in a cobalt blue pleather trench coat. She jokingly revealed what makes her a woman.

She walked down as the words “Power, Attitude, Style, Confidence and Sex” flashed on the screen. Then, Katy pulled up her trench coat to reveal her Spanx undershorts. The camera panned over to the Spanx tag revealing that the undergarments make her a woman too. Over 1.5 million fans loved the hilarious clip.

Her secret is also her new hair extensions

Katy Perry has been looking ultra-glamorous lately. As per Refinery 29, she has waist-length hair extensions. She’s been rocking the waist-graving old Hollywood waves on social media. Katy shared a series of photos on Instagram with her new blonde extensions styled in subtle waves.

While it’s not her most dramatic look, it’s different from the blonde bob she’s been rocking lately. Jesus Guerrero is the man behind her new look. He’s worked with the “Witness” singer for many years. Earlier this year, Katy posted a selfie on Twitter with the caption: “If you don’t love me at my pixie cut, then you don’t deserve me at my Goddess glow.”

What are your thoughts on Katy’s new look? Sound off below.

‘Bering Sea Gold’ Exclusive: Shawn Is Dead in the Water
‘Bringing Up Bates’ Season 10 Finale Details Revealed: When Does It Air?
‘Love After Lockup’ Josh Behind Bars For Domestic Violence On Courtney
Josie Bates & Kelton Balka Have HUGE News About Baby Hazel
‘Too Hot To Handle’ & ‘Love Island’ Premieres Will Battle For Views