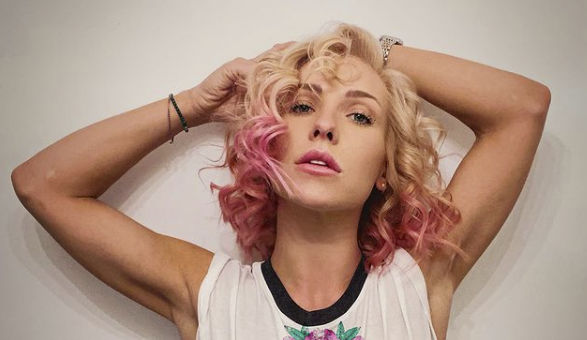 Who says you can’t find love during a global pandemic? Dancing With The Stars pro Sharna Burgess recently announced she’s no longer single.

“It’s been really awesome,” Sharna told Us Weekly in a recent interview. “I actually am not on the market anymore. But it’s very new and very, you know, it’s dating, essentially. No one’s calling us a relationship yet.”

But Who Could Sharna Burgess’s New Lover Be?

It’s so new in fact that she’s not willing to share the mystery man’s identity. But fans have a few clues. Fans spotted the DWTS Season 27 champion on a lunch date with Selling Sunset star Jason Oppenheim. He later commented that they were just good friends getting lunch. But that could be a lie if the couple wanted to keep things quiet.
Sharna also revealed she met her new love interest through a mutual friend. Jason’s co-star Chrishell Stause competed on Dancing With The Stars with year. There was plenty of time for Sharna and Chrishell to meet one another backstage. Was Chrishell Stause the mutual friend Sharna spoke about?

Others hope her new beau is her Dancing With The Stars Season 29 partner, Jesse Metcalfe. The two had electric chemistry throughout the season, even if they did only come in 12th place. Jesse is more tight-lipped about his personal life, but recent reports say he is still romantically involved with Canadian model, Corin Jamie Lee Clark. So far, Jesse Metcalfe seems like an unlikely contender.

Either way, Sharna says she is incredibly happy with the way things are going.
“I thought that when I met someone, I would be like scream it from the mountain tops,” the dancer told Us Weekly. “And it’s actually, it’s almost the opposite. I want to hold it close to me for just as long as I can to stay in this space and just enjoy that human for as much as I can.”
Sharna Burgess was actually in talks to become the next Bachelorette in Australia. However, that didn’t quite pan out. She said that her life was primarily based in the United States now, so it wouldn’t make a lot of sense to have a boyfriend over in Australia.
But at the time, she said she was looking for “Someone who already has gone through their own journey to themselves and their career and is ready to build something with someone else now.” The dancer said she was really looking for someone to build “memories and moments” with. Could she find that with Jason Oppenheim? Let us know what you think in the comments.
Dancing With The Stars hasn’t been officially renewed for Season 30 yet. But Selling Sunset is doing well and fans hope Jason Oppenheim will join the cast. Perhaps Sharna Burgess will even be his partner. Stay tuned for more.

‘Too Hot To Handle’ & ‘Love Island’ Premieres Will Battle For Views
Whitney & Zach Bates: BIG News On Baby Jadon, How’s He Doing?
‘You, Me & My Ex’ Coming To TLC: Here’s What We Know So Far
Wait, Is ‘Storage Wars’ Season 13 Over Already?!
‘Bold And The Beautiful’ Joe LoCicero Is Back As Vinny Walker But How?