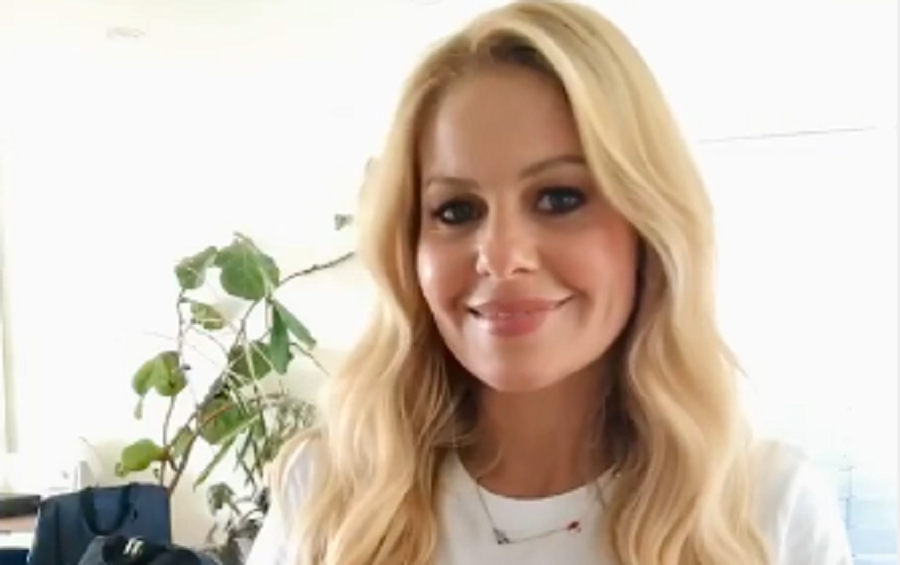 Candace Cameron Bure is best known for her role of DJ Tanner on Full House. The actress worked hard to look like the character. In a new interview, she revealed that she “mastered” DJ’s “iconic” bangs on the sitcom. The 80s and 90s were all about the “big hair,” and that was no different for DJ Tanner.

The character was known for her exaggerated bangs and big hair. Now, Candace is sharing some of her signature television looks. The secrets reveal that it took a lot of work. The Fuller House alum was the first guest on People’s Defend Yourself weekly show.

The actress is sharing some of the secrets behind her signature onscreen looks. Candace Cameron Bure appeared in the new weekly celebrity interview series, which airs Tuesdays at 10 a.m. ET on YouTube. The Hallmark Channel star talked about her Full House character DJ Tanner’s iconic bangs. Candace “mastered” the look, which consisted of lots of teasing.

But first, she had to choose whether DJ’s hair or Uncle Jesse’s body was more iconic. As Full House fans know, Jesse (John Stamos) was known for his mullet in the early seasons. But then he rocked a shorter hairstyle in the later seasons. Of course, he was known more for his good looks.

Candace felt that DJ’s hair was more iconic because it’s “creepy” to think about Jesse’s physique. “He’s my uncle!” she joked.

“I mastered the self-tease. Here’s how you got the iconic high bang, okay?” Candace continued. “You take the palm of your hand and you go like this.”

Then, the actress brought one hand to her head to mess with her hairline. “Which automatically gives you a rat’s nest,” she explained. “And then you took the Aqua Net and you went up and over, and then it would stay up. But this was the key – you had to do this.”

Candace continued to demonstrate her secret technique. She joked that most women who lived during the ’80s and ’90s would understand. It took a lot of hairspray to achieve the look of big bangs.

Which Fuller House star would she quarantine with?

Candace Cameron Bure reprised her role as the eldest Tanner sister on the Netflix reboot Fuller House. The series ran for five seasons from 2016 to 2020. It followed a widowed DJ Tanner-Fuller with three children. She managed to find love again while living in her family home in San Francisco with her sister Stephanie Tanner and best friend Kimmy Gibbler.

During the episode of Defend Yourself, Candace chose which character she’d prefer to be quarantined with amid the COVID-19 pandemic. She responded with a smile, “I hate to be so quick with this answer, but it’s Andrea (Barber)!” Candace said that they are “goofy” and that they “laugh a lot” together.

The women also share an affinity for “margaritas and wine,” as well as “chips and salsa.” Also, Candace and Andrea love getting their fitness on.

“We like riding the Peloton bike together – Andrea is a big Pelotoner,” Candace continued. “I do my Kira Stokes fitness app, but I get Andrea to join. And we just would be laughing nonstop and putting, like, ugly face masks on and being really goofy and silly, and that would make quarantine fun and the best.”

TV Shows Ace previously reported that Candace is on board for the sixth season of Fuller House. It’s likely that the sitcom could get another reboot due to its popularity. Be sure to check back with TV Shows Ace for more news and updates.