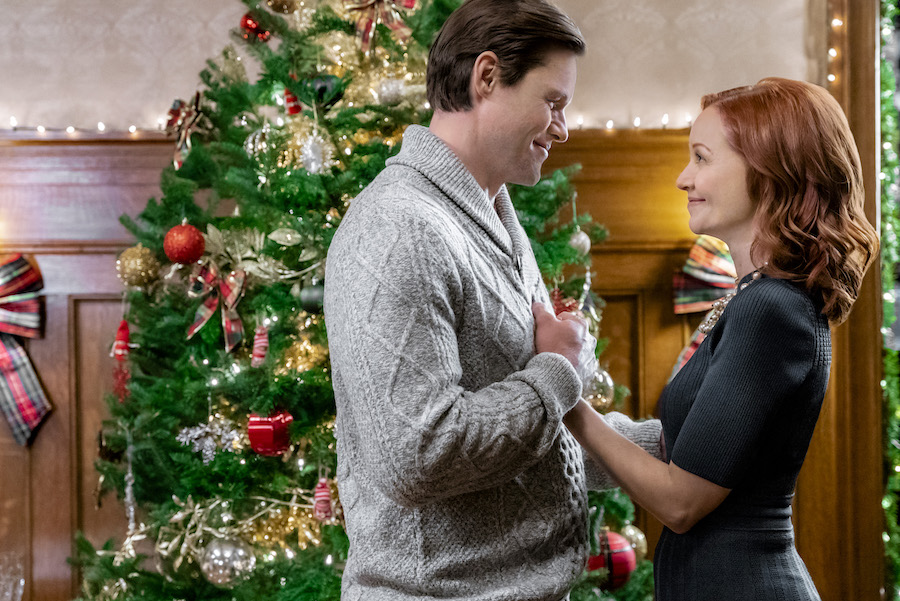 Hallmark’s final weekend of Christmas movies are fast approaching, are you ready to get Swept Up By Christmas? This Hallmark Movies & Mysteries offering pairs fan favorite, Lindy Booth (The Librarians, Christmas Magic) with Justin Bruening (Sweet Magnolias, All My Children).

What Is Hallmark’s Swept Up By Christmas About?

Hallmark’s press release shares that Swept Up by Christmas is about Gwen (Booth), who is an antique seller. She has previously clashed with Reed (Bruening) who owns his own movie and learning business. They didn’t get along because they have different “management styles.”

But, the owner of the magnificent Hawthorne House needs them to get their act together. This is the most gorgeous old estate in their home town. Now, that owner is moving into a retirement home. But, the owner needs them to clean out the years of trinkets and treasure inside.

Gwen and Reed see this as an opportunity to get the aging estate owner to discuss his past Christmases. They learn about some of the beautiful events and traditions. Most of all, Gwen and Reed discover that they both have a lot more in common than they ever realized.

As this is a Hallmark Movies & Mysteries Miracles of Christmas movie, expect something a little more emotional and sometimes even magical.

When Can You Watch Swept Up By Christmas?

After Christmas movies are over in early January, the network gears into Winterfest 2021 mode. Here are the five 2021 movies.

Taking A Shot At Love. This stars Alexa PenaVega (Picture Perfect Mysteries) and Luke Macfarlane (Chateau Christmas). She is a former professional dancer- He is a hockey player (Macfarlane) that needs to get back on the ice. This premieres Saturday, January 2, at 9 p.m. Eastern, on the Hallmark Channel.

A New Year’s Resolution. This movie stars Rady (Two Turtle Doves) and Aimee Teagarden (Friday Night Lights). She’s a morning show producer determined to say “yes.” She meets a “yes man” who teaches her how it is done.  This premieres on Saturday, January 9, at 9 p.m. Eastern, on the Hallmark Channel.

Two For The Win stars Charlotte Sullivan (Chicago Fire) and Trevor Donovan (90210). A world famous ski champion returns home to prep for a big race. But, it is a local ski instructor that changes his life.  This premieres on Saturday, January 16, at 9 p.m. Eastern, on the Hallmark Channel.

Love In The Alps stars Nazneen Contractor (The Christmas Ring) and Brooks Darnell (Young and The Restless). An average guy wins a luxury dream trip. Will that attractive concierge still like him if she finds out he is not rich? This premieres on Saturday, January 23, at 9 p.m. Eastern, on the Hallmark Channel.

Snowkissed stars Jen Lilley (USS Christmas) and Chris McNally (When Calls The Heart). Moreover, this is about a  “travel-averse” journalist that teaches a B&B owner how to be a good tour guide. This Hallmark Winterfest movie premieres on Saturday, January 30, at 9 p.m. Eastern, on the Hallmark Channel.