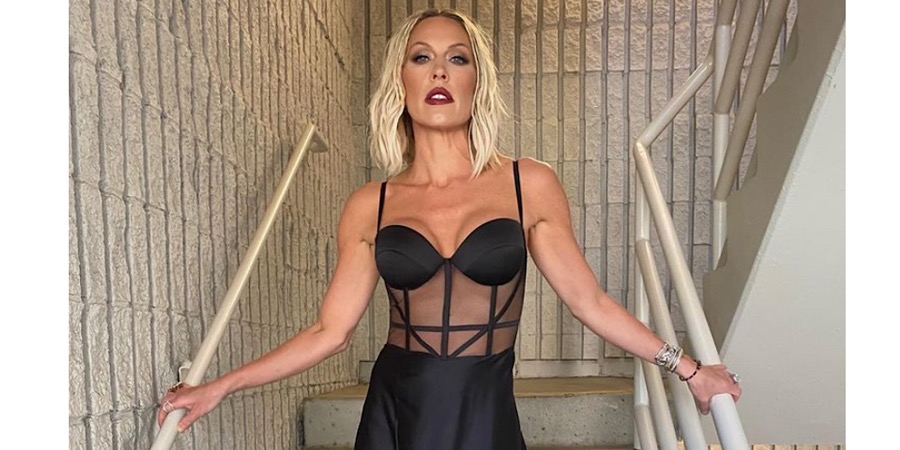 Braunwyn Windham-Burke has had some week. First, she officially came out to GLAAD as a lesbian. Then, Kelly Dodd claimed Braunwyn’s sobriety was just a story line for RHOC. But, it did not end there. Instagram trolls did not hold back when it came to slamming the mom of seven and a holiday photo.

Braunwyn bravely shared she was gay earlier in the week. Despite her and husband, Sean renewing their vows this season, their marriage hit a bump. During COVID, they announced Sean was moving out. Braunwyn was taking time to figure things out, as we will see in upcoming RHOC episodes. She said, over time, she was dating someone new. The morning after she announced she was a lesbian, Braunwyn shared photos of her girlfriend, Kris. Sean has been very supportive and they’ve all dined together. There are currently no intentions of divorcing. In Braunwyn’s opinion, it was getting sober that helped her come to her truth

Amidst all of this, Braunwyn has stayed sober, a journey she began at the beginning of Season 15. She’s been an alcoholic since she was a teenager with Sean as her enabler. But, Kelly Dodd spoke to Andy Cohen and claimed it was a story line. “I don’t think that she had seven kids so she could ‘not drink’ and I know her well enough that this was a pre-plotted thing that she wanted to do to get her own show. She wanted to get her own show, her talent agent told her to stop drinking. It’s all contrived. I don’t believe that she is a real alcoholic, no. You’ll see it after on at the end of the show, what happens. It’s really good.”

This is coming from the same person who said COVID was God’s way of thinning out the herd. But, the comments about Braunwyn were about to get much worse.

It’s the holidays so Braunwyn and her family took a lovely photo.

She decided to post it to her Instagram and was met with a bevy of harsh reactions:

“I am so confused!! But happy holiday!! It feels you are using the LBTQ community for a storyline. For potential deals or even spin offs With Bravo!! Nothing groundbreaking what you !! it’s 2020 still not being truthful !! 👀 What a joke!!”

“All for a story …poor kids”

And many more. So, Braunwyn did what she felt was best; she posted a separate photo of just herself where the haters had their own space to play. Dressed in a long, black dress, the 42-year-old captioned the IG post:

“Okay, you’ve all got a lot of opinions about what’s going on in my life, so instead of writing them on a cute Santa photo with the kids, you can write them here….get it out and then we can move on. #youdoyou 🌈💕❤️💋”

When it comes to kids, you do not go there. She said they were staying a family, it’s an adorable photo but it’s social media. I admire Braunwyn for taking a fierce photo and telling people to come at her!

Jinger & Jeremy Vuolo Net Worth 2021: How Do They Afford Living In LA?
Lisa Rinna Discovers The Secret To Happiness, Instagram Agrees
Lauren Burnham Battling Intense Breast Issue While Caring For Twins
Who Will Be The Next ‘Bachelor’? One Contestant Reportedly Getting ‘The Bachelor’ Edit
‘General Hospital’ Spoilers: Is A Maxie Recast On The Way?