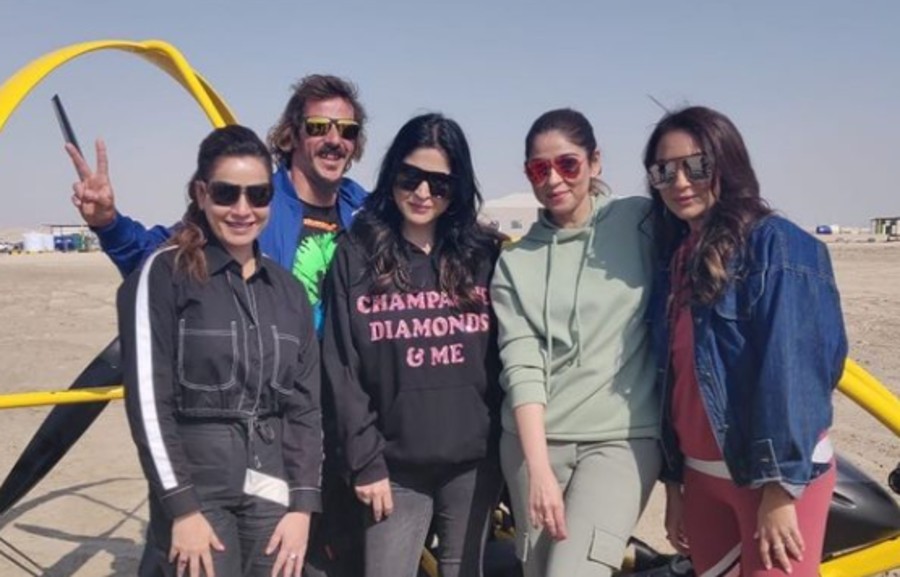 Chunky Pandey and Bhavana Pandey of Fabulous Lives of Bollywood Wives have two talented daughters. Their older daughter, Ananya Panday, already directed a short film title Daud to show off her talent. The twenty-two-year old up and coming actress has over fifteen million followers on Instagram.

Now their youngest daughter, Rysa Panday, is showing that she can sing in a deleted clip from the show. The clip shows how pleased Bhavana is her daughter is singing for her with her music tutor. The song she chose is, “Go With The Flow.”

In the post, Bhavana Pandey says she is really excited because Rysa has finally agreed to sing something for her. A reluctant looking Rysa takes the mike. The post on Dharmatic Entertainment’s Instagram is captioned, “A proud moment for mama bear @bhavanapandey as she sees her cub Rysa excelling in this extended feature!”

“Good Rysa, you have to give your mama a hug,” she says as she claps enthusiastically. The teenager doesn’t want to. Pandey also shared the video on her Instagram and fans showered it with heart emojis.

Bhavana runs a high street label LoveGen with two of her friends. According to Vogue she is very spiritual. Her husband jokes in the show that she has an astrologer advising her in her life. She also wards off the evil eye for daughter Ananya.

The Reality Star Planned To Act A Certain Way On Camera

On a Twitter interview with Sunday Midday, Bhavana Pandey talked about how she planned to act on the show. She said she had thoughts before filming that she would behave in a certain manner. When they started shooting, she said, “the emotions just flew.” Everything she was trying to control, those thoughts, just disappeared. She said your real self will come out.

Her other co-stars spoke in the video captioned, “Who says no to KJo! Four Bollywood Wives say the kids convinced them to let cameras follow.” KJo is the producer Karan Johar.

Were The Wives Hesitant To Do The Show?

Besides Bhavana Pandey the interview also features, Maheep Kapoor, Seema Khan, and Neelam Kothari. When asked if they were apprehensive about letting the cameras follow they had similar answers. Seema Khan said it was intimidating at first. She said it isn’t a scripted show and they are just being themselves. The fact they’ve been friends for so many years made it easier. She said she wouldn’t do it with anyone else. Over time, they just had fun and forgot the cameras were there.

Maheep Kapoor said it took a while to get everyone on board. Neelam said hell no and Seema was yes right away. She was still weighing the pros and cons. Neelam said knowing each other from twenty-five years made them more comfortable. Bhavana Pandey said you can keep up the act for a few minutes, but you can’t pretend all the time.

The Fabulous Lives of Bollywood Lives is streaming on Netflix and is still top ten in India.