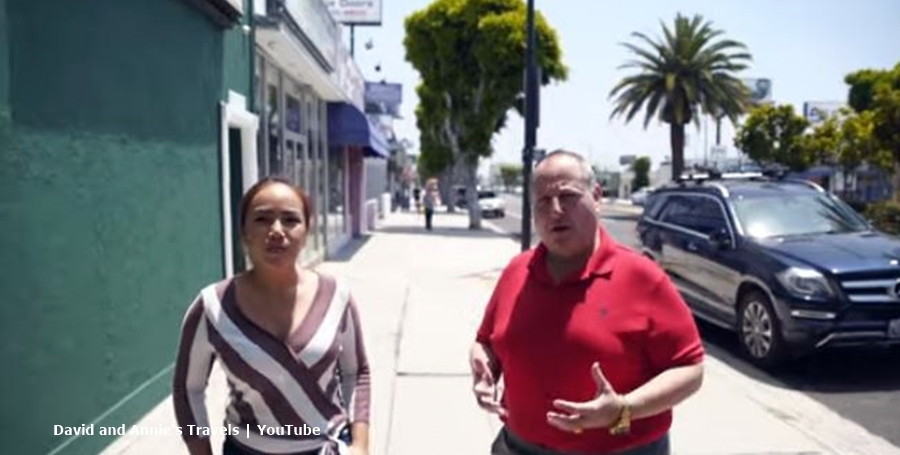 90 Day Fiance stars David Toborowksy and his wife Annie both shared the sad news that a close family member passed away. In fact, his dad, Murray Toborowsky died. On Instagram, fans saw that in September, they had dinner with his dad and celebrated his 80th birthday. While older people die, it’s never easy for those left behind.

We reported on November 14, that David seemed very worried about his daughter Ashley. He told his fans that she went down with the coronavirus. So, for a heart-stopping moment, fans might have assumed from his and Annie’s posts that she passed away. Well, it seems that Ashley’s okay. But, sadly, the news came on December 4 that his dad, Murray, passed away. It’s not clear what he died from, and no suggestion of COVID-19 came out.

Annie took to Instagram and shared that she and David heard the news via a telephone call. So naturally, today they feel “very sad.” But, they cherish many memories. Annie said that she promised his dad she’ll always be there for her husband and look after him. And, Annie called for prayers for 90 Day Fiance couple as they mourn their loss. Thousands of people sent in their condolences and prayers for Murray.

David shares photos of his dad

On his Instagram post about his dad’s passing, David shared the photo that fans saw on his 80th birthday. Plus, he shared a lot of photos of the family with their dad, and grandfather. In his caption, David wrote, “It is with the heaviest of hearts that my Dad unexpectedly passed this morning.” He mentioned everyone who loves him and who will always remember him. In the end, he said, “You will always remain with us. Rest in Peace Daddy. Murray Toborowsky.”

90 Day Fiance cast members sent in their loving support as well. Bear in mind, that David Toborowsky and Annie always step up for the new cast members. And, they seem popular on the franchise. Plus, they recently got their own cooking spinoff. Syngin Colchester, Robert, Anna Campisi and more told him how “sorry” they feel about the sad news. Paul Staehle, Ashley Martson, Stephanie Matto, and Armando also posted. So did Jenny and Sumit.

Of course, many fans also sent their condolences in. And, many of them know the pain of losing a dad. Even if people anticipate the death of an older loved one, their actual passing never weighs easily on those left behind. David Toborowsky’s daughter Ashley commented, “I love and miss him so much already 😭😭😭😭😭😭😭😭😭😭😭😭😭😭😭😭😭😭😭😭😭😭😭.”

It also seems very sad that Murray passed away as Christmas approaches. Every Christmas from here on probably brings a tinge of sadness for the 90 Day Fiance couple.