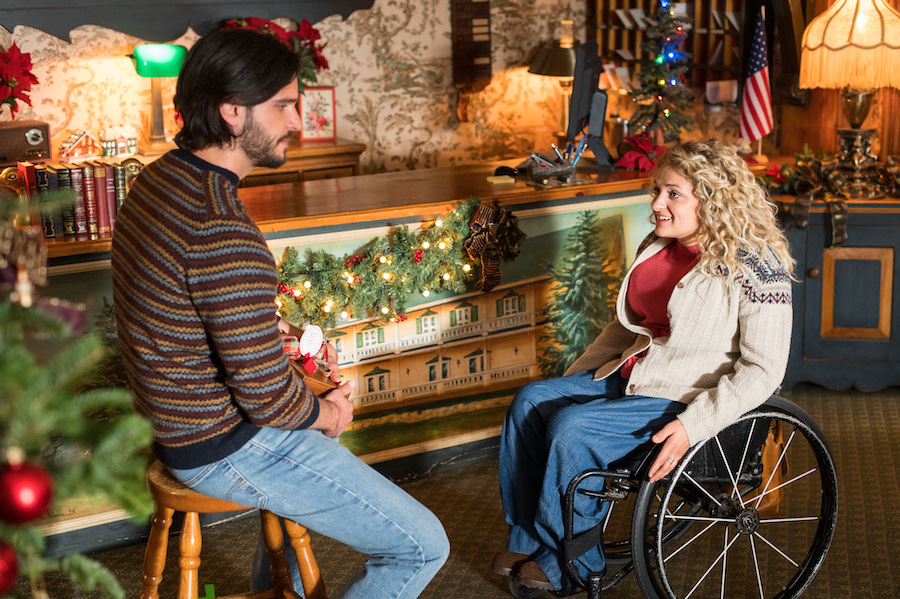 What Is Lifetime’s Christmas Ever After About?

According to Lifetime synopsis, romance novelist Izzi Simmons (Stroker) is headed to her annual Christmas retreat. She goes to the same bed & breakfast in a snowy town. But, work is on her mind. Unfortunately, the popular writer has serious writer’s block, and she has a deadline looming. Can this fun trip help her get some words on the page? Maybe!

When she arrives at the B&B, she meets the new owner, Matt (DiTomasso). This gorgeous guy looks amazingly like the dream guy in all of Izzi’s romance novels. Izzi and Matt enjoy some fun Christmas activities. Soon, the words start flowing.

That is not all that is happening. She may have started the beginning of her own happily ever after.

Ali Stroker is in a Lifetime Christmas romcom, but it sounds like her personal life is just as exciting. Just recently, her boyfriend, theatre director and actor David Perlow, proposed.

The Glee Project star told  People that the two had gone to Beacon, New York. The two were hanging out and she thought he was “having a conversation about ‘I wanna marry you.'” Ali looked down, and, “He had a ring!” She then screamed “What!?!”

Stroker also gave some advice to others about how she got to where she is at now. She was the first wheelchair user to be nominated and to win a Tony.  What does she recommend to others, if they want a similar career path?

Ali Stroker first advised that she had to work harder than she ever imagined. She also admits that she had to give up a lot. Second, she says to always “be kind.” Her third tip? She smiled and said, “Do not give up.”

“I hope that some little girl with a disability sees the movie and it ignites their own romantic fantasy," says Ali Stroker about #ChristmasEverAfter.

At long last, a disabled woman is portrayed as a character that is confident, ambitious, and desirable: https://t.co/gUkgk5AKqV pic.twitter.com/CacDBamuKL

Lifetime’s Christmas Ever After Star’s Favorite Part Of Script

When Ali Stroker saw the Lifetime script for Christmas Ever After, she immediately found something unique. She told IndieWire, “I was so thrilled to see disability wasn’t necessarily a part of the story.”

She further explained, “I believe that is progress. We don’t always need to talk about addressing a disability in a narrative. There can be a love story with somebody with a disability…that maybe doesn’t need to be explained.” Most of all, she wants to inspire. “I hope that some little girl with a disability sees the movie and it ignites their own romantic fantasy.”

Of course, one of the things that Ali enjoys showing in the movie is her driving with hand controls.

Director Pat Kiely allowed Stroker to take the lead on many details. Kiely explains that “She shared a lot of personal things in her own life. There’s a real romantic scene where Daniel takes her hand and pulls her up this ramp. She said her and her fiancé, when they have romantic strolls together….that’s how they do that.”

So that means Ali Stroker stars in a Lifetime movie where life imitates art, where the art imitates her own life?

Don’t Forget to watch the premiere of Christmas Ever After on Sunday, December 6, at 8 p.m. Eastern, on Lifetime.