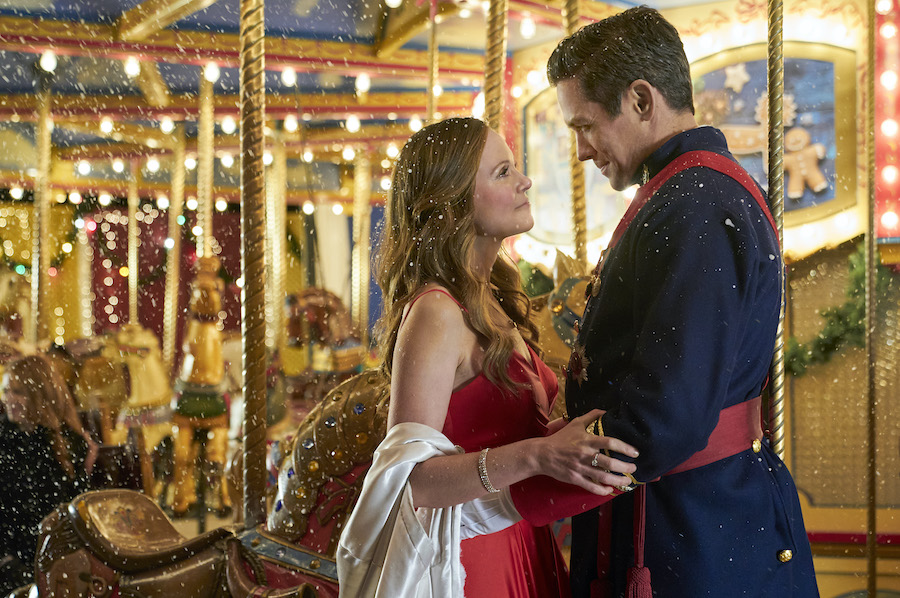 Ready for another royal romance? Hallmark’s Countdown To Christmas has just the one for you with A Christmas Carousel. Starring Rachel Boston (Check Inn To Christmas) and Neal Bledsoe (Coming Home For Christmas), this is a magical royal love story that will give you all the feels!

What Is Hallmark’s A Christmas Carousel About?

Ready for a new royal story? What is A Christmas Carousel about? According to the Hallmark press release, Lila and Roy (Stuart Hughes, Orphan Black), are a father and daughter carousel restoration business. Known for their incredible work, they are hired by the royal family of Ancadia.

They need their royal carousel restored. This is a gift for Prince Whitaker’s (Bledsoe) niece. Lila and Whit-the Prince’s nickname-don’t start out getting along. Soon, their shared love for the arts connects them.

Throughout the restoration, they begin to really connect and fall in love. But, Lila doesn’t think she has a future with the charming Prince. She knows he has to fulfill his royal duty, and that is to marry a pre-approved noble woman.

She returns home instead of seeing his engagement at the Christmas Gala. But, could there be some Christmas carousel magic in that that wish made on the carousel’s wishing horse? Is there a chance that a royal and commoner can find a happily ever after?

When Can You Watch A Christmas Carousel?

Don’t forget to head over to Twitter on premiere night. The Hallmark Channel and stars of A Christmas Carousel will be live tweeting. Ask questions, connect with other Hallmark fans and enjoy the movie with others. Just follow the hashtags and have fun!

What Is The Other Hallmark Royal Christmas Romance?

Have you seen Hallmark’s other royal Christmas romance, One Royal Holiday? This spectacular movie features Broadway stars Laura Osnes (In The Key of Love) and Aaron Tveit (Les Miserables) in a magical and fun Christmas movie.

This is the story of when royalty gets stuck in a small, Connecticut town of Kentsbury. Unknowing Anna (Osnes)  helps the mother and son out, before she finds out who they really are: The Royal Family of Galwick.

Because of the blizzard, there are no rooms available anywhere. So, Anna takes the mother (Victoria Clark, Homeland) and son (Tveit) to her dad’s (Tom McGowan, Everybody Loves Raymond) B&B. And then, finds out that they are royalty.

There are sparks and a special revelation, as James and Anna find love in this really great movie. And yes, with two Broadway stars, there is bound to be some pretty spectacular singing.

Don’t forget to watch the premiere of A Christmas Carousel, on Saturday, December 19, at 8 p.m., Eastern, on the Hallmark Channel.