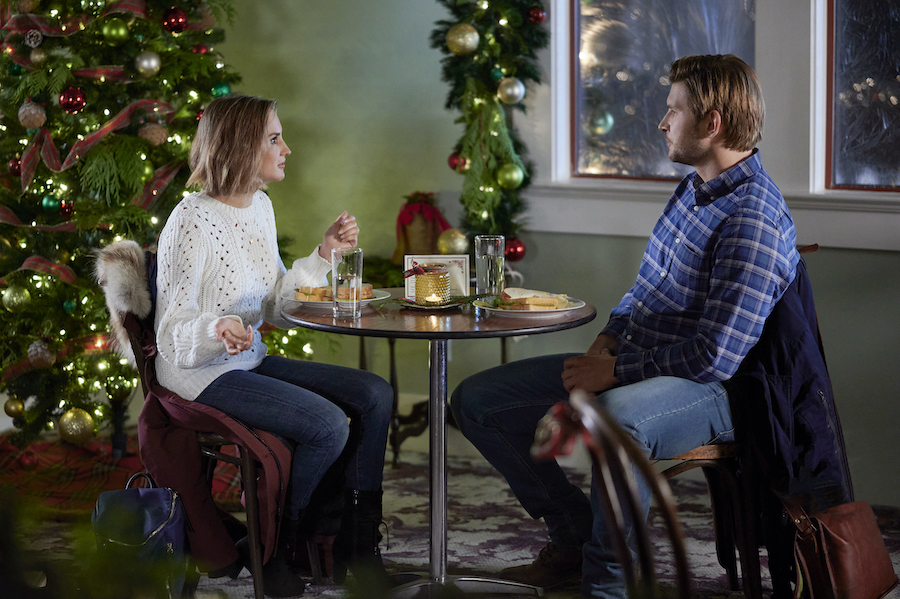 Ready for a crazy Hallmark Christmas road trip? The latest Countdown To Christmas movie is Cross Country Christmas. Starring Rachael Leigh Cook (Frozen In Love) and Greyston Holt (A Very Country Christmas), this is a really fun movie about just trying to get home for the holidays.

What Is Hallmark’s Cross Country Christmas About?

According to the Hallmark press release, Lina (Cook) and Max, (Holt) may be from the same small, Colorado town. But, they have never been friends. But, that soon changes.

Chaos ensues. Their cross country flight is rerouted. They wind up at the counter, but there are no available planes. Subsequently, the two decide to work together to get home for Christmas. Moreover, they are willing to take any form of transportation.

The two get to know each other, as they head back home. They visit new places and despite transportation challenges, start to form a bond. Could a rerouted flight turn to Christmas love?

Greyston And Rachel In Recent Movies

Both stars of Hallmark’s Cross Country Christmas have been in some recent, popular movies. The She’s All That star is currently on Netflix, playing a lawyer in Love, Guaranteed. Cook stars long with Damon Wayans, Jr. in this entertaining romcom. Her portrayal of quirky, struggling lawyer Susan Whitaker is quite fun. The banter between Rachel and Damon is very entertaining.

A busy single mom, Jeanette doesn’t even know who he is! She is so focused on working two jobs and trying to get her interior design degree online. He is burnt out, tired from being on the road. Although he was in search of solitude, he instead found love.

The second movie is A Very Country Wedding. This came out in 2019. Zane and Jeanette’s wedding is interrupted. They are separated, and this may be the end for the unlikely couple. We know how this ends, as the third movie is after the honeymoon.

When Can You Watch Hallmark’s Cross Country Christmas?

Also, be sure to head over to Twitter on premiere night. In addition, Hallmark and the stars of Cross Country Christmas will be live tweeting. Have fun tweeting with other Hallmark fans and the cast. Moreover, share your favorite scenes and make this a fun event.

Don’t forget to catch the premiere of Cross Country Christmas on Sunday, December 20, at 8 p.m. Eastern, on the Hallmark Channel.