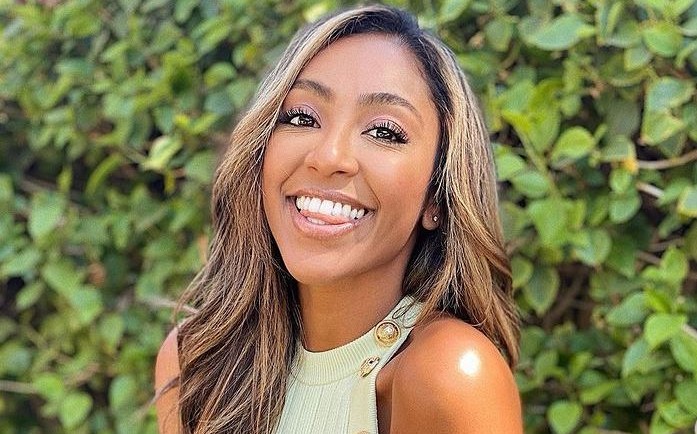 There is a new rumor brewing in Bachelor Nation. Fans are speculating and wondering if Tayshia Adams is engaged. The rumors come following an Instagram Story she shared in which she looks as if she’s sporting a huge diamond ring. Did The Bachelorette Tayshia Adams get engaged? Warning! Spoilers Ahead!!

Those who follow Reality Steve may already be aware of some spoilers he has released regarding the end of Tayshia’s season. However, it’s important to note that he has been wrong before. And, this season of The Bachelorette has been more difficult to spoil due to it being filmed exclusively in one location.

So, here’s what is known so far. Tayshia went to Instagram to share that she was making her coffee and getting ready to record a new podcast of Clickbait. Fans noticed instantly that she was sporting a ring on her finger. But, is it an engagement ring? See the pic below. What do you think?

Reality Steve went to his blog to analyze the theory. First of all, those following his previous spoilers for Tayshia’s season know that he says she does not get engaged at the final rose ceremony. However, that obviously doesn’t mean he’s 100% correct. He has been wrong before. As for who she picks, Steve says the final two men are Ben Smith and Zac Clark. He says Tayshia chose Zac. But, he said then and still says no engagement took place.

If it were a ring, why would she have it?

If Steve’s spoilers are wrong and Tayshia did get engaged to Zac, why would she have the ring? Well, everyone knows the final couple gets private weekends together. So, it’s possible they were together and producers gave her the ring for the weekend. Fans also believe this because Zac was the only one out of the final four who didn’t share an Instagram Story over the weekend.

These are all what ifs and speculation for now. Would Tayshia really spoil her own season? Chances are probably not, but weirder things have happened. It is 2020 after all.

Steve is still sticking by what he said that Tayshia and Zac are together, but not engaged. Fans will have to wait a little bit longer to see how it all plays out. The season finale of The Bachelorette will air December 22. Then, there isn’t much time before everyone will get to Matt James begin his journey as The Bachelor, January 4.