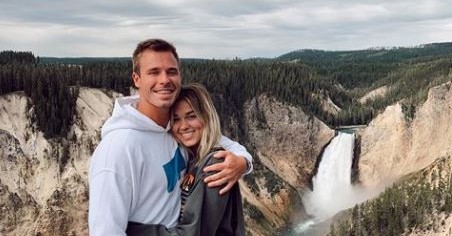 Duck Dynasty star Sadie Robertson is opening up more about her pregnancy. She’s sharing all things, including what it was like battling COVID-19 while expecting. Sadie says her motherly instincts kicked in while going through the illness. And, in happier news, Sadie and husband Christian Huff have chosen a baby name for their daughter.

People caught up with Sadie now that she is healthy and back on track enjoying her pregnancy. Sadie has had a busy year to say the least. In October, she and Christian announced to the world they were expecting. Their one year wedding anniversary came just two months later. They celebrated one year of married bliss November 25.

Sadie hasn’t had an easy pregnancy. While she loves being pregnant, she did have a rough first trimester. First of all, Sadie was sick with morning sickness and unfortunately also got COVID-19. She said, “I literally threw up every day for eight weeks straight, so that was crazy. This is my first week that I haven’t been sick, only one day. So that’s pretty funny.”

Sadie said, “The hardest thing was I did get COVID while I was pregnant and I was so sick from that, and so sick still in the morning sickness, so that was a challenge. Seriously, my heart goes out to every single pregnant person with COVID and everybody with COVID. They were telling me at the hospital, they were like, ‘Man, people have to deliver with it.’ I can’t even imagine. So that was challenging in and of itself.”

She described the illness saying, “It’s really a dark sickness.”

She really felt like a mom while having the virus.

Sadie admits she got really down during the pandemic and cried a lot. When she caught the virus, she did have to be hospitalized. Through it all she tried to stay positive.

She said, “But it was cool because I feel like that was the first time I really felt like I kind of became a mom because I was, I had to go to the hospital, I had to check on the baby. It was more for the baby and not for me.” Sadie continued, “I think those were really cool moments, even just the blessing of having nine months to prepare and kind of put your heart in the place of this baby is about to come and I’m about to be a mom and starting in that preparation has been really cool.”

Looking ahead, Sadie and Christian are excited to meet their daughter. She will be making her debut in early May, 2021. And, they actually already have her name picked out. However, to avoid trolls and their opinions, Sadie has decided to keep the name private for now.

Now that she’s past COVID, Sadie is looking forward to the holidays. They will be spending Christmas with Christian’s family. She is excited and thinks it will be a blast.

Stay tuned for more updates on Sadie and Christian.