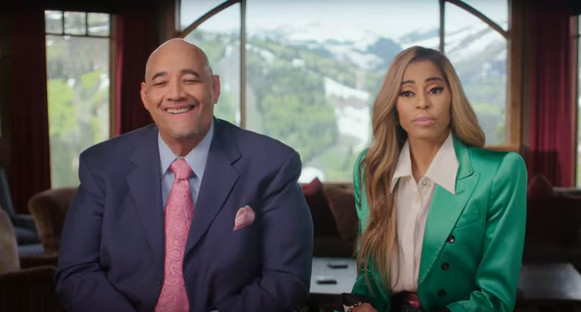 One of the main promotion tactics Bravo used for their new Real Housewives franchise is Mary Cosby’s strange marriage. Her now-husband was her grandmother’s second husband. While not biologically, the RHOSLC star is married to her step-grandfather.

It’s quite the point of contention among fans, as well as her co-stars. During the most recent episode, Jen Shah called Mary Cosby out for “f**king her grandfather,” per People. The reality star tried to explain it for viewers in the premiere episode. How did she come to marry her step-grandfather?

Mary Cosby Claims the Marriage Was Her Grandmother’s Last Wish

RHOSLC’s Mary Cosby really wants fans to know where she’s coming from regarding her unconventional marriage. In one of the first episodes of the season, she told the story of how the marriage came to be.

Robert C. Cosby used to be married to Mary Cosby’s grandmother, Rosemary (Mama) Cosby. Mama passed away in 1997. A year later, her widowed husband was ready to move on… with his step-granddaughter.

According to the RHOSLC star, there was a stipulation in her grandmother’s will that someone in the family marries Robert. Partly so that he had someone to take care of him and partly to keep their church in the family.

Rosemary Cosby and Robert C. Cosby led the Faith Temple Pentecostal Church in Salt Lake City. Upon her death, Mary Cosby became the co-pastor of the church with her new husband as the other pastor.

Viewers did learn that not everyone in the Cosby family accepted the new marriage. The RHOSLC star’s own mother disagreed with the decision. The two are still not speaking over it. In fact, her mom went on to start her own church in Salt Lake City, Mama’s Faith Temple.

Now another family member is speaking out about Mary Cosby’s marriage to her step-grandfather. According to one of her cousins, the marriage was not arranged, nor was it in the grandmother’s will.

Dan Cosby recently gave a bombshell interview with Up and Adam. He claims that there wasn’t any such marriage stipulation in the will. Rather, Mary Cosby and the Bishop simply fell in love after her grandmother passed away.

To back up his claim, the cousin points out that the family spent years in court because there wasn’t a will at all. Reality Blurb points out that Dan Cosby doesn’t offer proof other than claiming it’s all “public record.” Watch the full interview with Up and Adam below.

Was Mary Cosby Kicked Out of the Church Before Grandmother’s Death?

Allegations that the ‘arranged marriage’ narrative is false aren’t the cousin’s only claims. He also reveals that Mary Cosby was kicked out of the church prior to her grandmother’s death. Dan Cosby claims that Mary was “disfellowshipped” because of “selling marijuana, selling drugs, cheating.”

For that reason, he slams Mary Cosby’s claim that her grandmother wanted her to take her place in the church. In fact, he said there’s “no way” that is true.

Even before Mary Cosby gave viewers a peek into her church sermons, rumors abound about the church’s cult-like following.

Mary Cosby has yet to respond to her cousin’s bombshell allegations. But what do you think? Do you believe Mary’s “arranged marriage” story, or do you think there’s some truth in her cousin’s claims? Let us know in the comments down below.