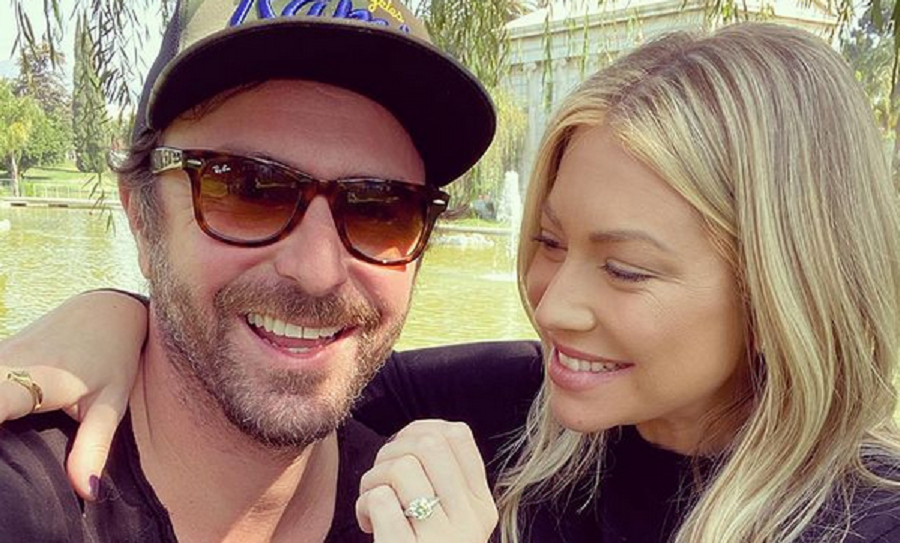 Vanderpump Rules alums Stassi Schroeder and Beau Clark are in lockdown mode. The couple quarantined for most of the year. They even had to cancel their Italian nuptials. Instead, they got married in late September in Tom Schwartz and Katie Maloney’s backyard.

While most of the Pump Rules crew has hung on several occasions, they followed COVID guidelines. They’ve gotten regular tests, practiced social distancing, and wore face coverings. Stassi wants to ensure that she has a happy and healthy delivery. So, she’s staying home for the next month until the birth of her baby girl.

On Wednesday, December 2, Beau Clark took to Instagram to post a new photo of Stassi Schroeder. The “Straight Up With Stassi” podcast host wore a maroon sweatshirt pulled up to reveal her pregnant belly. The reality star paired the look with navy-blue leggings that featured a Christmas pattern.

Beau wrote: “It’s December 1 st. Locked down with my 4 lovely ladies. We got this!” He also included the crossing fingers, Christmas tree, and sweating emojis. Also in the photo were the couple’s two dogs, Luda and Refund.

Stassi took to her husband’s post to joke: “So much sex appeal.” Tom Schwartz added: “Is it cool to say squad goals again yet.” Meanwhile, Lala Kent wrote: “She’s almost here!!! I love this!” Beau’s photo received over 15,000 likes and over 700 comments.

Residents of Los Angeles told to “remain in their homes”

Stassi Schroeder and Beau Clark prepared themselves ahead of time. On Wednesday night, December 2, news spread that residents in the city of Los Angeles should remain in their homes and follow the city’s “safer-at-home” order. The Mayor’s website posted a public order that listed several restrictions, including a ban on travel with some exemptions.

Shortly thereafter, Beau took to Instagram Stories to put some rumors to rest. He posted a screenshot of an article from Hollywood Life about Stassi Schroeder. In the caption, he wrote: “Who are these ‘sources’?? We literally talk to 7 people.” He included the crying-and-laughing emoji and facepalming emoji.

The article claimed that Stassi would “love” to have her own reality show. An insider told the celebrity gossip blog that the 32-year-old has “told those around her that she would really like to return to TV next year.” However, she’s not in a hurry to get back on television anytime soon with her marriage and growing baby bump.

“They’ve both worked really hard to take this time to better themselves after everything that’s happened, and their goals in 2021 is to be back to some sort of show again,” the alleged source said. “Stassi especially would love to have her own reality show about her life with her daughter and Beau. She misses the cameras.”

But Beau quashed those rumors. It doesn’t look like the duo will make a return to reality TV anytime soon. In June, Bravo fired Stassi and Kristen Doute from Vanderpump Rules after their racially insensitive comments. Both women apologized for their actions.