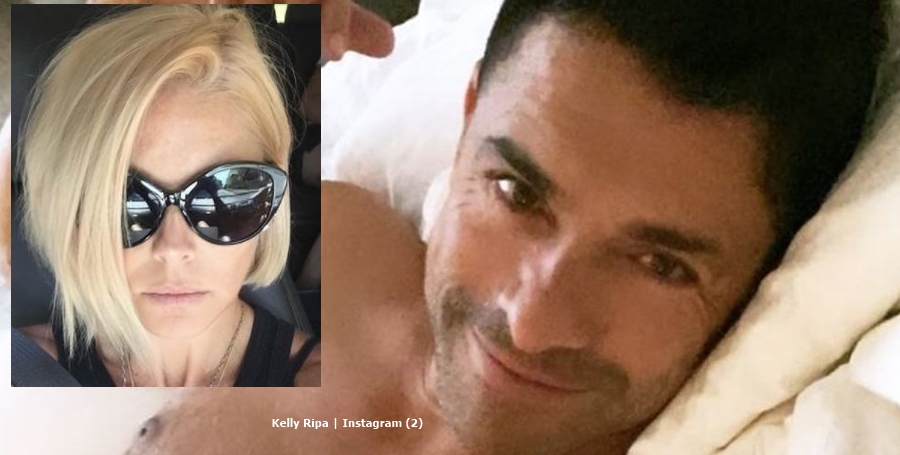 Kelly Ripa spent months without her husband Mark Consuelos. He went to Vancouver, Canada, filming for Riverdale. Clearly, as he left in about August, she can’t wait for his return. And now, she shared the happy news that they reunite soon. Live! With Kelly and Ryan fans suggest they get a room.

Mark and Kelly often share about their love for each other. And, their posts sometimes skid a bit too close for their daughter Lola Grace. In fact, she gets terribly embarrassed when they flirt on Instagram. We reported that Lola probably hated it when Kelly shared about “Hump Day” back in October. Back then she revealed a photo of herself in bed with Mark. He lay without a shirt on, and Kelly looked…satisfied. And, her caption read, “One year ago and still a full #humpday #mood 🔥this man eats #pbandj 🥪.”

Well, who can blame the 50-year-0ld Live! With Kelly and Ryan star? After all, she lives with a very hunky guy. And probably half the world wouldn’t mind a bit of rumpy-pumpy with him.

They are both successful in the entertainment industry, loaded with money, and have a happy family life. Kelly Ripa certainly did well for herself, her many fans agree. Now he finally returns home, and neither of them can wait. No doubt, as fans suggest, to rip their clothes off each other.

Mark Consuelos missed many Hump Days, Election Day, and Thanksgiving with Kelly. But thankfully, they spend Christmas together. And, Kelly already got the tree up and decorated. On Tuesday night, December 1, she shared a photo and the tree looked very cheery. Her caption sounds like a promising reunion for Mark. It read: “Even though it’s 2020, she got dressed in her fancy red skirt and ready for the return of a certain someone……🎄♥️💋.”

Mark responded to Kelly Ripa by saying that he “can’t wait” for it either. In fact, the couple spent so along apart, that the Live! With Kelly and Ryan star said she feels a “bit nervous.” But fans doubt any nervousness remains for long. Talking about “little red dress,” one of them said, “You know he will just rip it off lol.” Others agreed, and one follower told her, “Um, you two will definitely need to get a “room.” Or send your kids [away].”

When one of Kelly’s followers suggested that “Zaddy’s home,” Kelly told them he’s not. But, he will be there “very soon.” No doubt, knowing Kelly Ripa, she shares loads of photos of Mark Consuelos after their long-awaited reunion. Hopefully, for the sake of their daughter Lola, not inside their bedroom.