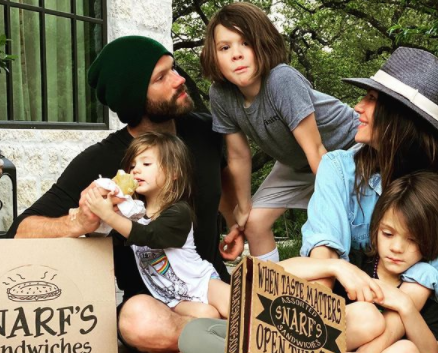 Jared Padalecki shows us all that he is just a normal guy, he works hard and has to work from home because of COVID like the rest of us. So what if he is a famous actor. At the end of the day he a family man and his little girl will not let him forget it.

On Monday Jared shared a post on Instagram saying he was “working from home,” only his little helper wasn’t really helping. Jared’s daughter Odette decided that her dad needed a bit more color, so she wrapped a garland of pretty leaves around his neck. Then she likely felt he was not paying enough attention to her, so she covered his face with one of the leaves while sporting a smile. So much for working from home. 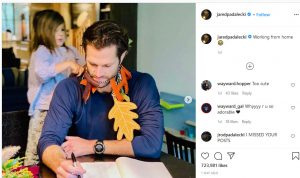 Jared married his wife and former Supernatural co-star, Genevieve Cortese in 2010. Together they share three beautiful children, Thomas (Tom), Austin Shepherd (Shep), and Odette (Dot). The couple first met on the set of Supernatural in 2008 when Genevieve played the recurring role of Ruby. Genevieve had since retired from acting in 2012, but she reprised her role of Ruby this year for the fifteenth and final season of Supernatural. We are happy to be seeing more of her but her hiatus was by no means lazy. Genevieve is a full-time mom and she operates the lifestyle blog Now & Gen. 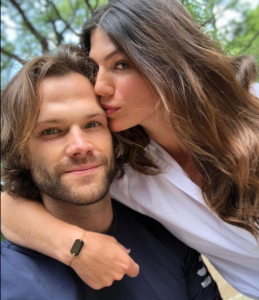 Jared Padalecki was one of the main series actors for Supernatural. The show aired its final episode on November 19, 2020, telling the final story of the Winchester brothers. Supernatural is the longest-running show on The CW network as well as the longest-running American live-action fantasy TV series. Padalecki said he “couldn’t be more pleased with the way it turned out,” and added, “The series finale is my favorite episode of all-time.” Jared’s co-star, Jensen Ackles, agreed with him. Ackles shared that the finale is “a fantastic way for the show to wrap up.” 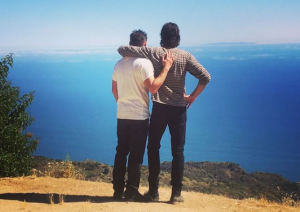 Supernatural fans have been pleased with the ending overall, though many a tear was shed through the finale.

But now that the long-time show has come to a close; neither Padalecki or Ackles are idle. Ackles will star in season 3 of The Boys. And Jared has taken on the role of Cordell Walker in the CW reboot of Walker, Texas Ranger, which will premier in January. That is likely the script he is reading over while Odette is distracting him, so working from home may not be the best idea on that deadline. Genevieve will also be joining Jared on Walker as Emily Walker, the deceased wife of Cordell.