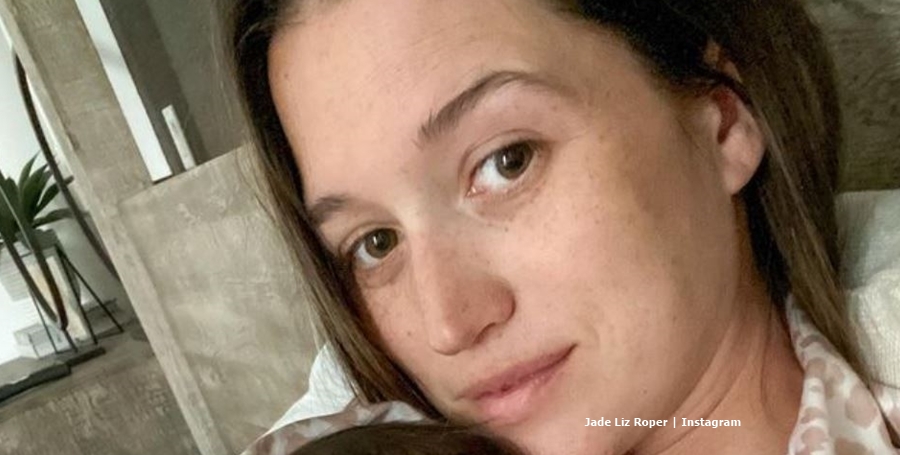 Jade Roper recently gave birth to the third child that she and Tanner Tobert brought into the world. Baby Reed Harrison joined Emmy and Brooks, making them a family of five. And, many Bachelor in Paradise fans agree that all three children look adorable. However, the BiP couple experienced some fertility issues along the way. Now, she opened up about it.

Jade Roper and Tanner Tolbert struggled with fertility a bit

With three kids in their lives, one might imagine that Jade and Tanner never struggled with fertility. After all, Emmy came along without hassle. Brooks arrived at supersonic speed and ended up birthed in the closet. Then little Reed arrived in a water birth. And fans agree he’s the spitting image of his dad. We reported that fans simply melted at his first official photoshoot by Patty Othon.

Bachelor in Paradise fans knew that Jade Roper struggled with feeding Brooks. In fact, he weighed in a bit malnourished before they got his Lip-Tie surgery done. But, who’d ever guess they struggled with conceiving him? Jade spoke about fertility in her life when it came to Emmy, Brooks, and Reed. She noted that ABC fans ask her about it, as some of them struggle themselves.

Jade shared a photo of herself with Tanner and Brooks on Tuesday, December 1. Her caption read, “I’m asked almost daily in my DM’s from women and couples who are trying to conceive about any tips I might have to help them successfully conceive.” Next, she explained about each child and the various problems they faced. Actually, Brooks gave them the biggest problem. For some reason, they went through a period of “unexplained infertility.”

According to her post, Jade Roper and Tanner tried “every trick in the book” with Brooks. And it still took “10 long months.” Meanwhile, they never planned for Reed at all, who came as a  “total surprise.” Their first child, Emmy, came on like clockwork, planned and easy. But, because of Brooks, she feels some empathy with those who struggle to conceive. The BiP star talked about the pain of seeing a “negative test, month after month.”

Jade recommended an app that might help as it’s much more than “an ovulation calculator.” Called the 1in4 App, it also monitors the physical changes. Plus, it comes with access to blogs about “TTC stories, discussion boards and more to provide support and community.” Importantly, it also offers other topics like “miscarriage, infertility, IVF, adoption and surrogacy.”

Jade Roper might have used the same app, as she talked about how it helps “us” through these types of fertility worries. Did you struggle with fertility problems like Jade and Tanner did with Brooks? Did you find an app that helped you? Sound off in the comments below.