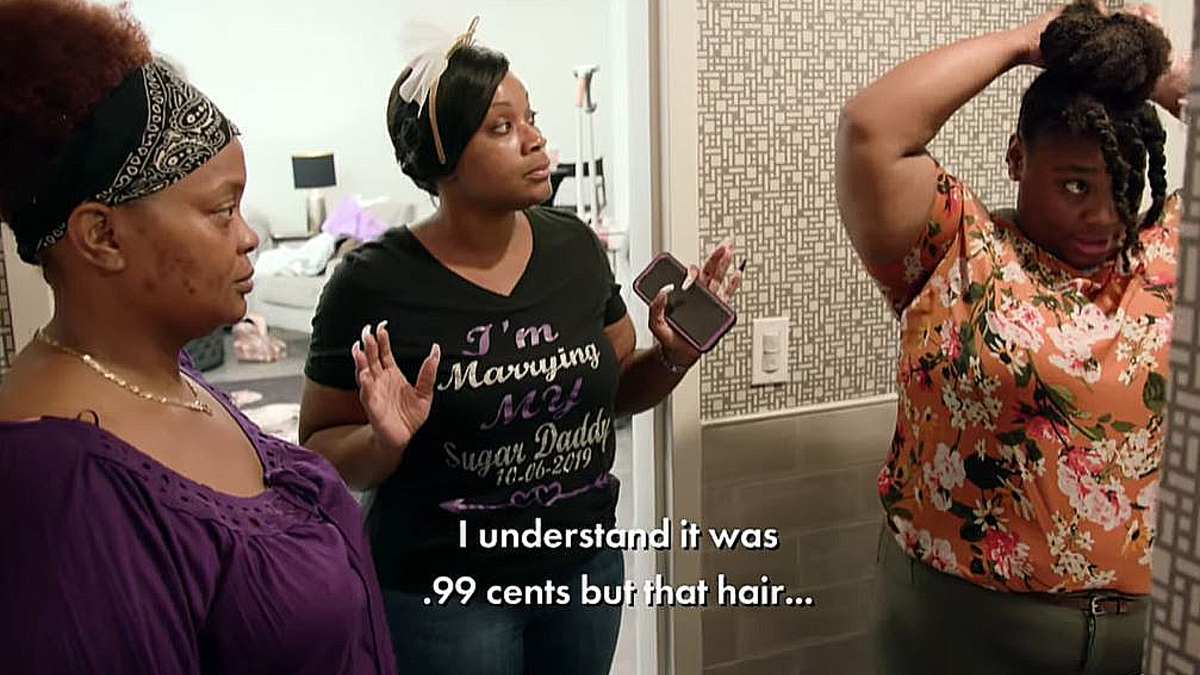 On the next installment of Bridezillas for WETv, we have a hairy situation. Our bride, “UhhhZilla” Roshonda, has a choice between her mother and her father pushes everyone away, leading to the ultimate wedding meltdown.  But first, the urgent hair situation.

The bride is understandably upset at her family’s indifference to her wedding and to make matters worse, one of the bridesmaids has a 99 cent hairpiece she is trying to pull off for the required “neat high bun” look that the bride wants.

It is neither neat nor high… and Loni Love’s remarks are on point.

In TV Shows Ace exclusive preview we meet her bridesmaids Theresa, and Anniemythia (“Mythia” for short), while her mother is shunting her calls to voicemail.

In the clip below, Roshonda explains her situation. She says: “This morning I’m just trying to get prepared after last night, Kyle was really upset on top of
everything else, I’ve been trying to reach my mom but she don’t answer so…I’m worried.”

The solution is to groom her small dog while her bridesmaids are dealing with their hairstyles. Narrator Loni Love says: “When your family’s a mess, love on your pets.”

As they all decide to crack open some wine and relieve some stress, the odd hair choices suddenly become an issue.

Roshonda says: “I need to make sure that all of my bridesmaids are going to be in pocket…like I need your hair to get done. I don’t want to hear nothing about any excuses or anything. I need you to step up or step out.”

The gauntlet is thrown, as Loni says: “I’d be careful giving these ladies the option, some might choose to step out.”

What’s the issue? Buns. Hair buns need to be high and neat and tight. However…one is really off the mark.  Roshonda reads everyone the riot act as she repeats that she gave strict hair styling orders.

Love recaps the reality and says: “[We have] the banging bone combo, the bandana wrap, the double arm center ponytails…girl what are you doing?!”

One bridesmaid says her 99 cent bun is perfect, everyone else is not buying it,  Love cuts to the chase and says: “The only thing that can fix this [99 cent bun] is about 200 dollars and four hours at the salon right now.”

Roshonda repeats her hair missive: “I need uniformity. I need perfection and this just turned into a whole mess. Let me call my mama… she need to be
here for this whole process.”

But mom does not pick up and the call goes straight to voicemail.  She says: “This is my day and my mom just keeps sending my ass to voicemail. I’m about to have an anxiety attack.”

Loni says: “I would not be surprised if mama doesn’t show up.”

Also on this episode, “GagZilla” Veronica is planning a wedding she doesn’t want, but when her groom has life altering news, will their big day come to a halt?

WEtv hit series Bridezillas bust nerves, finances and sees battling bridesmaids while the bride will risk it all in the epic slay for their perfect day.

From foolish behaviors, party fouls to dress malfunctions, these “strong, sassy brides” will get the wedding of their dreams come hell or high water!

Our tour guide for the fun is the esteemed comic Loni Love. This Emmy Award and NAACP Image Award winner is the new voice of its signature series.  She’s the ticket to narrate the drama and the joy (mostly drama) as we go through the behind-the-scenes of the making of an epic (or not) wedding happen.