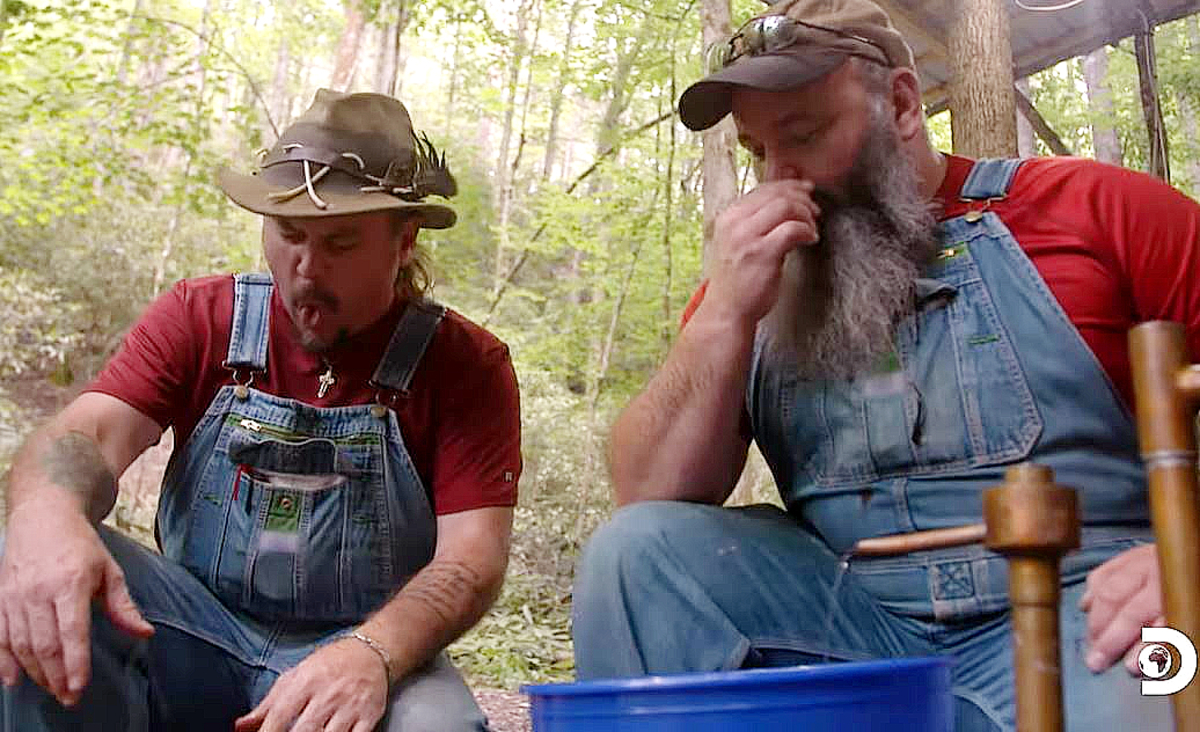 On tonight’s Moonshiners for Discovery, we will follow up the stories that started at the beginning of the season. The action focuses on Mike and Jerry’s very complex still and later in the episode the mystery of the missing Mark and Digger corn.

But the TV Shows Ace exclusive clip reveals that Mike and Jerry’s elaborate still may have some OSHA safety issues looming.

Namely, the vapors that ignite at the slightest spark.

Last week, Josh and Brian scouted a new creek side still in North Carolina while Mike and Jerry headed through Sevier county to find metal parts for their ambitious still.

Mike and Jerry traveled to find the needed pipe and sheeting for the tall and unusual still that will be filling many bottles at once.

In a clandestine meeting, the men bartered for the copper sheeting and pipe, $800 worth, and they traded their $140 a gallon alcohol for the metal. Trouble was the man wanted 10 gallons and they hemmed and hawed and finally settled on it. Mike figured it was $1400 worth of alcohol but ceded that they needed the parts.

As the clip progresses and the liquid comes out of the still, they light it up and see how potent it is. They note the cleanliness of the high proof alcohol and say it was exactly what they were looking for.  Mike says: “Hell I can’t even explain in words how excited I am just to see it run off…we are running alcohol out of this.”

Previously Jerry noted the still, when completed, would stand thirteen feet tall.  Last week we saw that Jerry was tightening the column still which is built like a jigsaw puzzle, and in the clip below as he climbs up to check it, he says: “I’ll tell you what I’m already getting drunk from the fumes up here.”

As we witnessed how he and Mike worked on the thirteen bubbler plates as they pieced the new piping together. Their still, if it works correctly, will make 95% pure alcohol.  It’s actually quite an intricate piece of machinery.

In the clip, Mike lights a cup of vapor up and it pours fire. We see how Mike and Jerry’s column still is also spewing ethanol vapor, causing them to panic.

Meanwhile Digger and Mark are reaping the benefits of a windfall of corn, until their plans dry up when their surplus corn supply mysteriously disappears.

In our clip below, Mike wins the award as he says: “But we’re running alcohol out of this rig man… I’m as happy as a puppy with two peckers.”

And also on the episode tonight, when Josh lands a windfall of peaches, he and Tickle forge a peach brandy-making alliance.

In addition to watching Moonshiners on Discovery, viewers can join the conversation on social media by using the hashtag #Moonshiners and following Discovery on Facebook, Twitter, and Instagram.