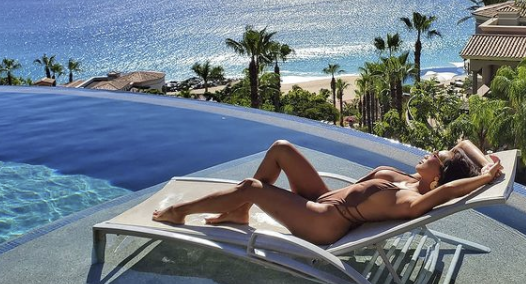 Jeannie Mai had the time of her life competing on Dancing With The Stars this year. However, her dreams of reaching the Mirrorball Trophy abruptly came to an end. She withdrew from the competition ahead of the November 2 episode due to a medical emergency. Jeannie suffered from epiglottis and her doctors said her throat was in danger of closing. She had no choice but to drop out. But now, she feels much better. The Real hostess felt well enough to take a relaxing vacation with her fiance, Jeezy.

But mostly, Jeannie’s fans are just thankful she’s doing well these days. Things got really scary for a while.

“My sore throat turned out to be strep throat that quickly turned into a parapharyngeal abscess,” Jeannie told PEOPLE. “I was breathing like Darth Vader. It was a traumatic experience.”

She went on to say that she really hoped she could get the surgery quickly and go right back to Dancing With The Stars. She even thought she could learn the routines virtually. But her doctors forbade her.

“But he said, ‘Absolutely not.’ Because any form of respiratory work — like walking fast, getting excited, laughing — causes the blood pressure to swell in your throat, because that’s one of your main pipelines for breathing, and that alone could even erupt or swell them closed more,” Jeannie explained.

It was a rough time, but she made it back in time for the season finale to cheer on the finalists. Kaitlyn Bristowe and Artem Chigvintsev ultimately won first place.

Looking Forward To The Future

After eating a diet consisting mostly of cold soups and juice, Jeannie definitely looked forward to Thanksgiving. Fans are glad she got a helping of leftover turkey.

Now that the medical emergency is in the past, Jeannie Mai and Jeezy can focus on wedding planning. They said in previous interviews they would love to have a winter wedding. But since COVID-19 cases are still really high this year, they’ll probably realistically shoot for 2021 instead. Perhaps even later.

Doesn’t Jeannie Mai look great in her swimsuit photo? Let us know what you think in the comments. Follow us on social media for more stories like these. We’ll update you if we hear any more news about Jeannie Mai.