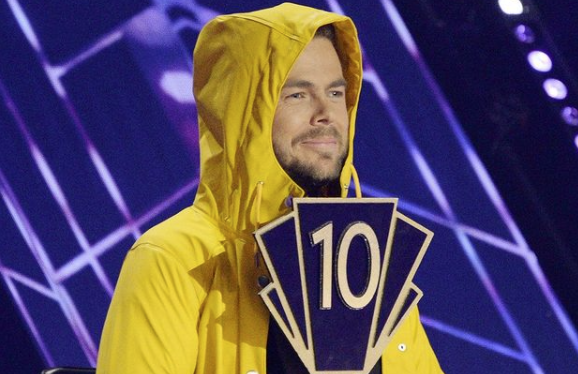 If you tuned in to the Dancing With The Stars finale, you got to see an amazing performance from the amazing Derek Hough. However, you probably didn’t realize that he suffered an injury just before the finale. But Derek is a professional and the show must go on. He recently made a virtual appearance on Live with Kelly and Ryan to discuss what happened.

During his finale performance, Derek dancing with a lot of backstage props. At one point, he leapt off a crate. However, he says he fell through the crate during rehearsal, injuring his leg.

“My foot went through it, and basically just like, my thigh, my shin was all bloody and bruised. So that happened right before this performance.”

But even with the leg injury, Derek Hough managed to go on anyway and stun viewers at home.

Kelly Rippa joked that the dancer would have to learn to pace himself as he got older. She said that even basic activities like hanging up your coat can be a crisis.

You can check out that part of the interview here:

But it seems like Derek Hough feels much better. He went on to perform on the “Disney Holiday Singalong” with his girlfriend Hayley Erbert and sister Julianne Hough. And if you missed those performances, you can find them on YouTube. Time and time again, Derek blows us all away.

Could He Return To Dancing With The Stars Permanently?

In fact, viewers loved seeing Derek return to Dancing With The Stars this year. After 17 seasons and six Mirrorball Trophies, he more or less retired from the show. But this year he came back to replace Len Goodman behind the judges’ table. Len couldn’t travel due to COVID-19 restrictions this year.

According to some sources, the change could be permanent.

ABC hasn’t renewed the show for Season 30 yet, but Len Goodman will be 77 by next fall. He may already be thinking about retirement. He also had skin cancer removed from his forehead over the summer, so his health is also a concern at the moment. Everyone loves Len. But is it time for him to give up his seat?

Meanwhile, Derek Hough is only in his 30s and has a lot of life to bring to the show. Tyra Banks serves as both the hostess and executive producer and loves Derek. In the season finale, she even said she would love to find a way to include both Len and Derek in Season 30.

So what do you think about all this? Could Derek Hough be a great addition to the judges’ panel, or do you want Len Goodman back? Would you be okay with both? Let us know what you think in the comments.