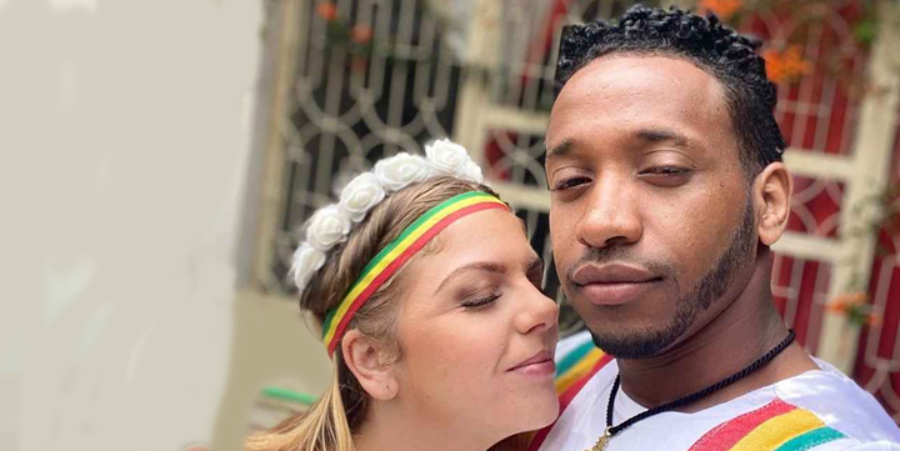 The finale episode of Season 2 of 90 Day Fiance: The Other Way was stressful for Ariela Weinberg. Carrying baby Aviel, while struggling through crowds of people wasn’t her idea of a holiday. Biniyam Shibre had been planning to propose, but their fighting nearly caused him to change his plans. Luckily for the couple, he did propose indeed and Ariela said yes!

Biniyam is a devout member of the Ethiopian Orthodox Christian religion. For this reason, he was excited to share the annual Timkat celebration with Ariela and Aviel. Biniyam, 29, said in his confessional on Sunday’s episode that, “Today is a special day.” He went on to explain that he plans on proposing to Ariela that day. Biniyam said he would love to be with her for the rest of his life.

Timkat is the Ethiopian Orthodox Tewahedo celebration of the baptism of Jesus Christ. While Ariela is of the Jewish faith, Biniyam is a devout follower of the Ethiopian religion. A month before, Ariela had finally agreed to allow Biniyam to baptize their one-month-old son, Aviel, in his faith. He now wanted to share a beloved annual religious holiday with his family.

When Ariela and Biniyam arrived at the festival, she immediately became concerned about walking into the crowd with baby Aviel. Meanwhile, Biniyam had the baby in a carrier on his chest. He insisted they go deeper into the crowd in order to get sprayed with holy water. However, Ariela became panicked, as other attendees pushed up against them. She said it was enough, worried her baby would be hurt.

Biniyam’s opinion of Ariela being scared of Timkat

Biniyam said in his confessions that he has a theory why Ariela got so upset at the thought of being sprayed with holy water. He said this is because she has an “evil spirit” that is afraid of being “cast out.”

Meanwhile, Ariela and Biniyam fought over the subject, with Ariela telling him not to yell at her. Shibre said she was an “annoying person” and was “selfish.” However, after the fight started, they both agreed it would be best for them to leave the festival. Ariela and Biniyam went to his brother’s home close by, so she could breastfeed Avi. He left her there, returning to the celebration.

Ariela did admit she has “a tendency to freak out,” and agreed that she could have expressed her concerns in a calmer manner. After feeding Aviel, she decided to leave him with his aunt Mimi and went searching for Biniyam to try and turn their day around.

After searching a little, Ariela found Biniyam in the crowd, walking up to him and hugging him. She told him she loves him and he took her hand. The pair explored the festival together. Later they met up with the rest of the family and Biniyam told Ariela to turn around. He said his sister wanted to tell her something. When she turned away, Biniyam got down on one knee. He was holding a diamond ring hidden inside a lime.

On the Timkat holiday, women dance, while men throw lemons and limes at the ones they like. As noted by In Touch, if the woman likes the man who threw it, she will catch or pick up the lemon or lime. After Ariela turns back, Biniyam asks her, “Will you marry me?” The stunned mom-of-one shouts over the loud music, “Oh my god. Yes, I’ll marry you!”

In her confessional, Ariela said it was a big surprise, especially after the day they had just had. She said it was crazy, but it was the “coolest proposal of all time.”  The fact that they were fighting all day and she could say yes to his proposal proves their relationship will last.

Ariela said even when they fight, they still love each other at the end of the day.

Ariela also made a post to Instagram, sharing the images pictured throughout this article. She captioned the images, writing “The season is over! Well, except for the tell all…” Ariela closed her caption with the words, “And we are ENGAGED!”

Sunday’s episode was the finale of Season 2 of 90 Day Fiance: The Other Way on TLC. Fans will now have to wait for the Tell-All to learn more.