Chelsea Houska has decided she’s ready to retire from Teen Mom 2, and fans can’t help but wonder who will replace her. While the reality TV star has always been considered a fan favorite… She’s nearly 30 years old. And, fans can understand why she’d like to walk away from a show associated with being a teenage mother.

That being said, everyone fully expects MTV to renew Teen Mom 2 for another season. So, fans can’t help but wonder… Who is going to step into the shoes previously filled by Chelsea Houska? Who will MTV replace her with?

MTV has two options to replace her

Any time any of the shows under the Teen Mom franchise umbrella lose a cast member… They find a way to replace them with someone else. This happens in 16 and Pregnant, Young and Pregnant, Teen Mom OG, and Teen Mom 2. So, we can only assume MTV would have to replace Chelsea Houska with someone to fill that hole in the cast list.

Technically, MTV only really has two options. They can either replace Chelsea with someone who is familiar. Or, they can go find a fresh mother to introduce. Because the series is called Teen Mom 2… There is no reason why they couldn’t pluck a fresh expectant teenage mother to join the cast. But, she might feel a little out of place with the other cast members being in their late 20’s and early 30’s.

Possibly the more realistic option would be for Teen Mom 2 to consider pulling someone from one of their other shows. They could find someone who the Teen Mom fan base is already familiar with. This would also be someone who understood how these shows work. And, they’d mostly just fall right into place. Then, it just becomes a question of who do they choose? Fortunately, one of the cast members from the Teen Mom spinoffs thinks she knows the answer. And, she thinks it should be her. 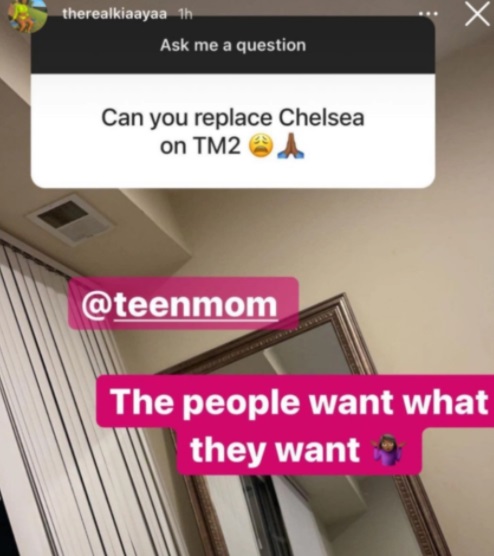 During a Q&A session on her Instagram Stories, Kiaya Elliott shared a question asking if she could replace Chelsea Houska on Teen Mom 2. The 19-year-old mother from the MTV spinoff Young & Pregnant reveals this is something fans seem to want. She responded to the question with a shrug comment and “the people want what they want.” Her response to the question certainly sounds like someone who would be open to stepping into the role.

We know Young & Pregnant is returning for a Season 3. And, we know they started filming episodes for the new season back in September. We also know MTV hoped to do 12 episodes for Season 3.

Would you like to see Kiaya Elliott shift over to being on Teen Mom 2 and replace Chelsea? Or, do you think MTV should consider cancelling Teen Mom 2 as it continues to lose all its original cast members?