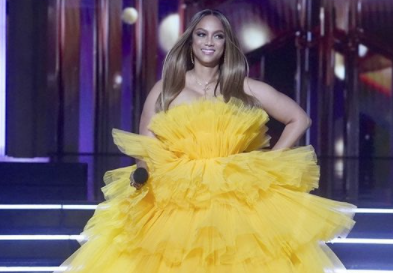 Whether you loved her or hated her, Tyra Banks graced the Dancing With The Stars stage each Monday night this season. But now that Season 29 is over, she really misses being backstage. The America’s Next Top Model star recently posted about it on her Instagram page.

The post features Tyra in that blue dress from the finale atop a metal cart.

“First Monday without my @dancingabc fam and I’m already missing all the dance, the glitz and the glam, and getting to play dress up each and every week! This first dress from finale night had me feelin’ like I was about to float away like a cloud (and trip on the stairs!!!) Already can’t wait until next season where you know we will take it up 10 notches. Cuz that’s how we do.💙” the new hostess writes. 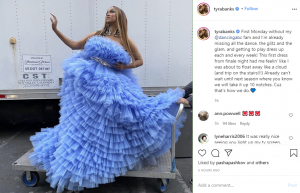 Could Tyra’s wardrobe actually go 10 notches higher? What’s more extreme than the blue finale dress? Check in next season and see for yourself.

Tyra Banks did the best she could with her new role, but not everyone likes change. In fact, many Dancing With The Stars viewers became downright hostile after show execs announced she would be the new host.  Tom Bergeron faithfully hosted DWTS for years, but execs decided they wanted to move in a new direction. Bergeron gracefully announced his departure on social media. And even though he says he would never willingly return to DWTS, he wishes Tyra and the rest of the cast and crew the best.

Season 29 just ended, so we don’t know much about Season 30 yet. But if fans don’t like change, they may be even more upset if certain rumors come true.

Len Goodman May Retire, And Many Think Derek Hough May Take His Place

Len Goodman didn’t participate much this year due to the pandemic. It wasn’t feasible for him to fly back and forth between England and L.A., so he stayed in Europe this year. Former pro dancer Derek Hough took his spot instead. Everyone thought Derek did an amazing job this year. So good, in fact, that rumors say he may be a permanent feature to the judges’ table.

Everyone loves Len, but he’s not getting any younger. He will be 77 next fall and had skin cancer removed this summer. It’s not outside the realm of possibilities to think Len Goodman may retire. If he does, Derek Hough would make an excellent replacement.

And if you watched the show at all this season, you know how much Tyra Banks loved Derek. In the finale episode, she said she would love to find a way for he and Len both to return for Season 30. But fans will just have to wait and see. ABC hasn’t officially renewed the show for Season 30 yet.

Do you like the new changes to Dancing With The Stars, or do you miss the old format? Let us know in the comments.