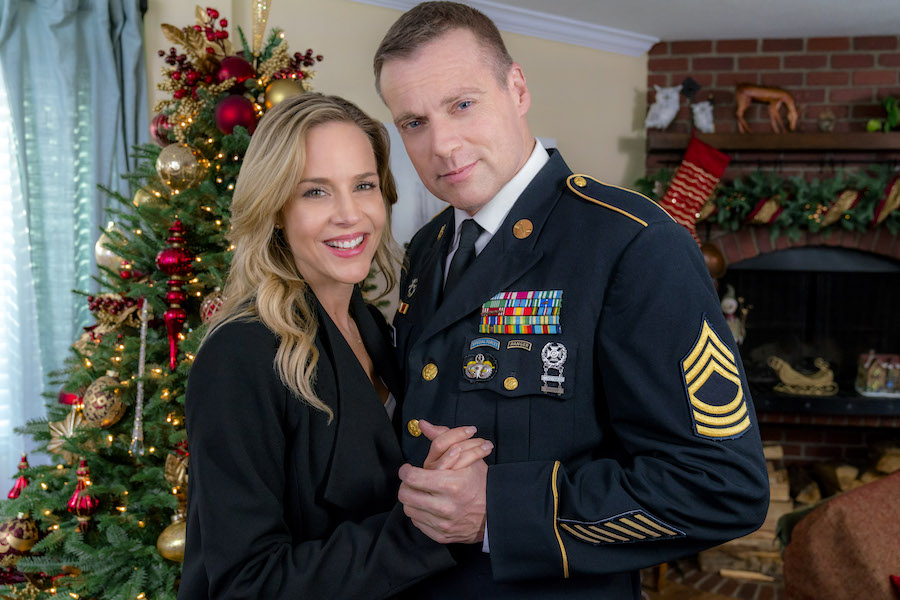 Hallmark’s Miracles of Christmas shares a heartwarming story of being healed by the magic of Christmas. Christmas Homecoming is a military-themed movie stars Julie Benz (Dexter) and Michael Shanks (Stargate SG-1).

What Is Hallmark’s Christmas Homecoming About?

According to the Hallmark press release, Amanda (Benz) is a military widow. Her Christmas spirit is gone, and she doesn’t feel any joy during the season of hope. She winds up rending an apartment to Army Captain Jim Mullins (Shanks). Although he is a soldier recovering from a serious injury, he has a lot of Christmas spirit.

The pair wind up working together for a Christmas fundraising effort. Pinewood’s military museum will close down without some help. So, the two “wounded birds,” as they call themselves, create a bit of Christmas magic.

After a successful effort to save the museum, the two share a kiss. Is Amanda ready to love again? Well, not so fast. Jim is being deployed on Christmas Eve. Now, the couple’s love is tested by the real-life trial of being in an active-duty relationship.

Moreover, can Amanda overcome her fears to continue to live her life and trust that Jim will return safely home to her? Hallmark’s Christmas Homecoming shows the real sacrifice and relationship challenges for those serving in our military.

Stargate fans are going to certainly tune into this Hallmark Christmas movie. Michael Shanks is one of the most beloved stars from the original series, portraying Dr. Daniel Jackson. But, he is not the only major Stargate star that has also worked in the Hallmark universe.

Hearties know that Kevan Smith (When Calls The Heart) was in Stargate SG-1 for several episodes, and was a regular reoccurring character in Stargate Atlantis.

Jill Wagner, who is in this year’s The Angel Tree, was one of the most memorable characters in Stargate Atlantis. She guest starred in two episodes as the kick-butt Larrin.

Paul McGillion from Picture Perfect Mysteries, played Dr. Carson Beckett on Stargate Atlantis. Of course, Amanda Tapping, who played Dr. Samantha Carter on Both Stargate SG and Atlantis, has become quite a popular director. She has even directed a few Hallmark movies. For example, back in 2015, she directed Lacey Chabert in Family For Christmas.

When Can You Watch Christmas Homecoming?

Although Hallmark filmed Christmas Homecoming in 2017, this is a beloved Christmas movie that Hallmark brought back for 2020.

Be sure to check back with TV Shows Ace for information and times on all 40 Countdown to Christmas and Miracles of Christmas movies. You want to make sure you catch the cornucopia of Christmas cheer that will last into 2021.