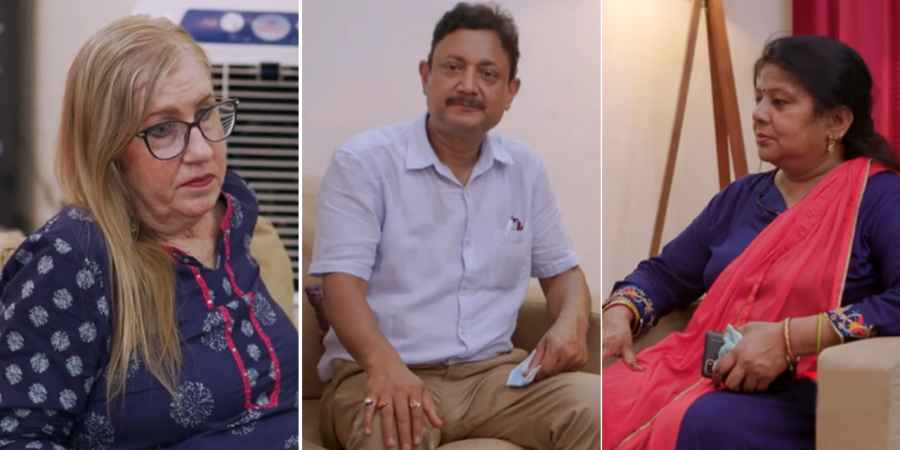 90 Day Fiance: The Other Way star Jenny Slatten’s visa is set to expire soon. This means she and Sumit need to get married soon. However, after a confrontation between Jenny, Sumit and his parents, their relationship is in doubt. Sumit’s mother, Sahna, went on to use emotional blackmail to get them to cancel their plans. In fact, she threatened to kill herself should they wed. Jenny is now threatening to return home to the US.

90 Day Fiance stars Jenny and Sumit and his parents

Sunday’s finale episode saw the long-awaited confrontation between Jenny and Sumit and his parents.  They were against the relationship from the start, mainly because Jenny is around the same age as Sumit’s mom. Meanwhile, on her first visit, Jenny had spent four months in his parents’ home, pretending to be Sumit’s friend. They only realized what was going on when they realized the 90 Day Fiance star was sneaking into Sumit’s room at night.

Now Jenny’s visa is set to expire, time is short. She and Sumit need to marry, and soon. However, on inviting his parents over to talk about this, they put their foot down. Sumit’s mom, Sahna has said all along that she won’t accept the relationship between Sumit and Jenny. Now, she pulled the oldest trick in the book, threatening to commit suicide should they marry.

Sumit’s parents had forced him into an arranged marriage in the past, which led him to be suicidal. They ended up getting divorced, which cost plenty of money. Now, Sumit’s dad, Anil, wants to try to legally block their marriage. In the meantime, however, Jenny and Sumit found out they can marry without the parents’ approval.

Despite Anil and Sahna’s insistence that they cannot marry, Jenny and Sumit had planned a ring ceremony to mark their engagement. They wanted to go ahead with the ceremony without telling his parents. However, Sumit’s brother Anil said they must tell the parents, or he would be forced to do so.

To try and preserve his relationship with his parents, Sumit invited his parents over to his apartment, which ended up being a disaster. As mentioned, Sahna said should they married, his parents would be “dead to him.” And she meant that literally!

Jenny told Sumit’s parents that she loves their son and she is not leaving him alone. Meanwhile, Anil told Sumit to “leave this illusion” and face reality. He even suggested that Sumit find “another oldie” and marry her instead. Anil suggested a hundred-year-old, with kids older than him. He then got really nasty, asking Sumit, “This is all you could find?” Anil said Sumit could easily find other women “a million times better” than Jenny. He suggested his son looked harder.

By this stage, Sahna had enough of the situation and became emotional. She asked Jenny to leave her son. Sahna went on to tell the cameras that she and her husband are so “ashamed” when others see their son’s relationship with Jenny. She said it reflected badly on them and they have to keep their eyes lowered.

Sumit then shoved a table aside, going on his knees in front of Sahna to talk to her face-to-face. On seeing this, Jenny finally had enough. As noted by ET, she left the room, saying, “I’m out of here,” adding,  “I cannot do this to his family. I need to just go back to America.”

In a preview for the next episode, Sumit tells Sahna that she cannot stop them from marrying. Jenny then returns to the room and finally loses her temper completely. She shouted, “Enough talking to these people!”

90 Day Fiance made a post on Instagram, telling fans to “Stay tuned for a big announcement and more to come.” Hopefully, we will learn whether Jenny and Sumit do stay together, or whether she heads for home.