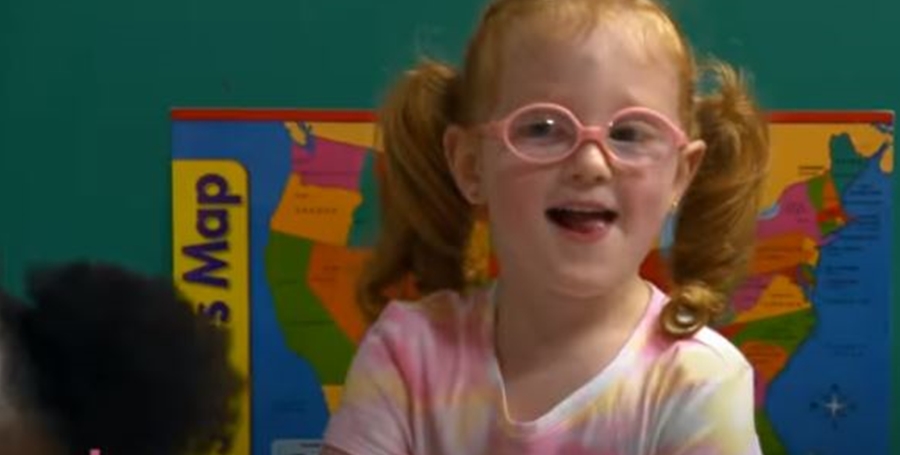 OutDaughtered quint Hazel is the only Busby child that wears eyeglasses. That fact and her red hair make her the easiest quint for TLC fans to identify. She looks very cute with her glasses on. And, as she wore them for a long time now, she seems quite at home with them. Now, she showed her dad Adam how she cleans them.

We reported in early November, that Hazel went for her 3rd eye checkup in four months. For some time, fans feared that more eye surgery might be on the cards for the little girl. But her August consultation seemed routine, although she struggled a bit. So in September, fans seemed relieved that Hazel got some new lenses in her eyeglasses. And, it’s not a big deal as eyeglasses sometimes need adjustment.

However, the Outdaughtered quint Hazel went back again more recently. That came when the family visited Austin and Danielle took Hazel for another checkup. But so far, no bad news came. So hopefully, the little girl needs no further surgery. And, Adam revealed that sometimes she wears a pirate patch at home to help exercise her lazy eye.

Here’s how Hazel cleans her glasses

On November 28, Adam shared some clips of Hazel on his Instagram Stories. And, he asked her to show him how she cleans her glasses. The cute kid obliged and took her glasses off. Then, she licked one side. Next, she breathed on both sides to steam them up. And finally, she rubbed them clean with her top. That’s now it’s done, dad!

Certainly, it looks like the OutDaughtered quint Hazel learned to live with her glasses. Actually, The Wall Street Journal noted that “nearly 50% of Americans wear corrective glasses.” And, “according to the trade group Vision Council…most of them are guilty of the biggest crime in lens care: Exhaling onto their lenses, then wiping the fog off with their shirt sleeves.”

How should Hazel clean her glasses?

According to All About Vision, people should never use their shirttail for cleaning their glasses as the lenses might scratch. The site also frowns on using saliva. But hey, most people don’t have access to the recommended way all the time. Warm water, dish liquid, and a clean lint-free toweling should do the trick. However, the world’s a busy place. And nearly everyone cleans their glasses just like Hazel.

OutDaughtered quint Hazel has a lot of things more important than cleaning her eyeglasses to think about. Beaux dog needs some playing with. And, there’s a playroom where she can get creative. Plus, the pool needs her to check out the water temperature. And, no doubt there’s a lot of healthy snacks on the go somewhere. Or, a lizard that needs catching for her sister Riley. Nope, life’s far too busy to waste time when you’re a five-year-old on the go.