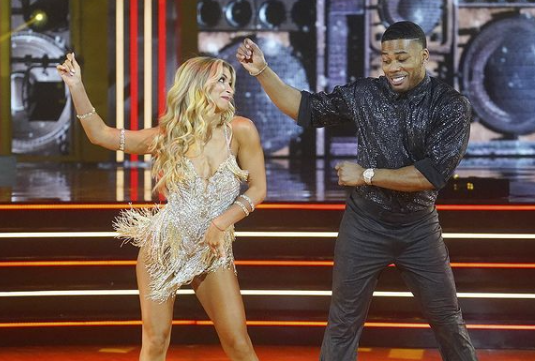 Against all odds, rapper Nelly came in 3rd on Dancing With The Stars this season. He didn’t win first place, but that’s okay. He has his eye on another goal now.

During his time on DWTS, he wore custom-made shoes nearly every week. Fans went crazy for them! But now that the season is over, Nelly plans to donate the shoes to one of his favorite charities. The Teen Project will auction off the shoes and use the money to help human trafficking victims. TMZ reported that Nelly donated at least 10 pairs of shoes. The entire collection could go for $50,000 or more.

Nelly is pretty passionate about this cause. In 2020 alone, he helped The Teen Project raise about $820,000. TMZ reports that this is about $300,000 more than he helped raised last year.

TMZ reports he helps raise money for Vera’s Sanctuary, which is a branch of The Teen Project. It’s a rehab facility for sex trafficking victims. The Teen Project allegedly used the money to help some of the victims pay for college.

If you’re interested in learning more about The Teen Project, you can visit them online.

But Nelly is interested in many other charities in addition to The Teen Project. During his time on Dancing With The Stars, he also discussed Jes Is 4 Jackie. Nelly launched the campaign to help find a bone marrow donor for his sister, Jackie. She ultimately lost her battle with leukemia, but the rapper managed to educate many more people about bone marrow donation in the process. He dedicated one of his DWTS performances to her memory.

The rapper is involved in other non-profits such as 4Sho4Kids Foundation and Do Something’s Tackl Hunger campaign. Back in 2006, he hosted a fundraiser to collect money for scholarships and even set up one named after Michael Brown. Nelly also reportedly sends two students to college every year for the past 10 years.

Many people who aren’t familiar with Nelly might not know about his charitable efforts. However, anyone who knows and loves him isn’t surprised by his actions.

Dancing With The Stars And Future Projects

Even though Nelly had a good time on Dancing With The Stars, he probably won’t return any time soon. He said in recent interviews that it really took a toll on his body. However, it’s clear he and his partner Daniella Karagach will be friends for life.

However, show execs may be able to talk him into a singing performance. That is, whenever they can pull him away from the movie set. Nelly landed the role of Chuck Berry in the upcoming Buddy Holly biopic. The project is called Clear Lake and we don’t know much about it yet. But hopefully, Nelly will be able to use his star power to raise more funds for his causes.

Did you know Nelly was such a philanthropist? Make sure to follow him on social media to keep up with him. Check back with us for more stories like this one.