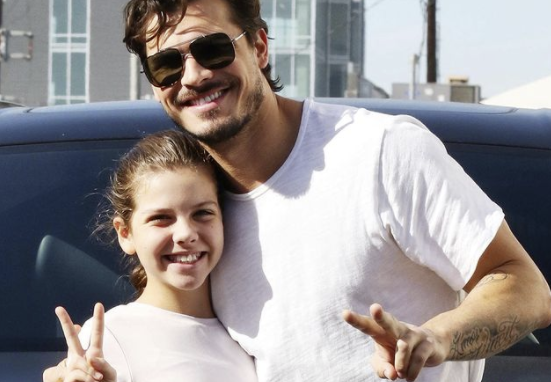 Dancing With The Stars pro Gleb Savchenko publically announced his split with his wife a few weeks ago. He and professional dancer Elena Samodanova were married for 14 years and have two little girls. Even though things got messy over the past few weeks, Gleb managed to enjoy a great Thanksgiving holiday with his daughters. He posted a few adorable photos on his Instagram page over the holiday weekend.

“Happy Thanksgiving from my family to yours ❤️” the dancer captioned the photos. His 9-year-old, Olivia is snuggled up to his side while his 3-year-old Zlata, lays on his stomach. Zlata’s Hello Kitty pajamas are absolutely adorable.

Gleb Savchenko Wants To Be In His Daughters’ Lives, No Matter What

Even though he and Elena split up, Gleb said from the beginning they planned to co-parent the girls.

“It is with a heavy heart that I tell you my wife and I are parting ways after 14 years of marriage. We still intend to co-parent our wonderful children together who we love so dearly, and we will strive to continue to be the best parents that we can to them. We ask that you respect our family’s need for privacy and healing during this time,” he wrote on Instagram to announce the breakup.

Gleb and Elena haven’t been super kind to one another in the press, but it seems like they’re doing their best to spend time with their daughters. Both of them frequently post photos of outings they take with Olivia and Zlata on social media.

The Dissolution Of A 14-Year Marriage

Shortly after Gleb announced the split, Elena spoke to the press. She told PEOPLE that Gleb repeatedly cheated on her, and a “recent inappropriate relationship” finally pushed her over the edge.

Many Dancing With The Stars fans immediately speculated his Season 29 partner, Chrishell Stause, was to blame. However, Elena never directly confirmed the mystery woman’s identity. Gleb and Chrishell adamantly denied they were ever romantically involved.

“While I will continue to respect the privacy of my family, I will not stand by and allow false accusations and internet rumors go unaddressed,” the dancer told PEOPLE. “My relationship with Chrishell was and remains strictly platonic. Our friendship during our season on DWTS was not the reason for our split. Elena and I have had longstanding issues in our marriage. This has been an ongoing situation between Elena and I paired with poor timing.”

He went on to say that he hoped Elena would keep their personal lives private. He was disappointed to learn she spoke to the press about their marriage. Chrishell Stause released her own statement on the matter.

Do you think Gleb Savchenko and Chrishell Stause had an affair? Let us know in the comments. Keep checking back with us for more stories like these.