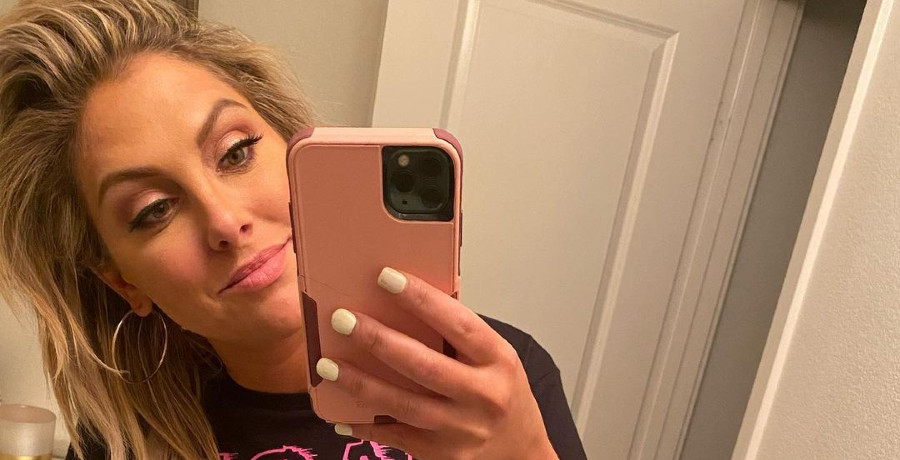 Gina Kirschenheiter isn’t feeling one of her The Real Housewives of Orange County co-stars. In a new interview, she dishes on which of the housewives should leave the show at the end of Season 15. And it’s not the same person fans wish Bravo would get rid of.

Gina Kirschenheiter clearly didn’t get along with one of her co-stars during the first few weeks of filming the new season. As fans saw play out in the early episodes of Season 15, Braunwyn Windham-Burke took shots at the size of Gina’s home, among other things. When Gina found out that Braunwyn was talking about her behind her back, she confronted the mom-of-seven.

The confrontation happened during a party at Shannon Beador’s home. After Braunwyn revealed that she was 30-days sober, Gina saw Braunwyn in a new light. Braunwyn and Gina hashed out their issues, ending in Braunwyn inviting Gina to attend an AA meeting with her.

However, it seems that the ceasefire doesn’t last very long. In a recent interview with Access Hollywood, Gina Kirschenheiter put her co-star on blast. While she respects Braunwyn’s sober journey, she’s not sure if it should be fodder for reality TV.

She said that Bravo isn’t the “right venue” for Braunwyn to explore her “sexual confusion” or for “figuring out her marriage.” In one of the recent episodes, Braunwyn and her husband of 20 years, Sean Burke, renewed their vows.

The vow renewal was filmed months ago. More recently, Sean moved out of their shared home and Braunwyn began exploring a relationship with someone else. It’s the couple’s version of a “modern marriage.” The RHOC star did reveal around Halloween that Sean has since moved back home.

However, Gina thinks Braunwyn’s issues are “hard” for the ladies to “navigate…as a group.”

Gina did say that while a “modern marriage” wouldn’t work for her, it is “less messy” than a divorce. So, she gets why it appeals to Braunwyn. Watch the RHOC star’s full interview with Access Hollywood below.

Bad Blood Between the Two Bravolebrities

Gina Kirschenheiter’s comments about Braunwyn may reignite their feud. During the party at Shannon’s house, Gina called Braunwyn a “sloppy chihuahua” over her past drunken behavior.

Additionally, Gina spoke to Braunwyn about a “creepy” text she got from Sean. Bravo showed the text on-screen. On the surface, it seems that Sean is making sure Gina got home okay after a party, but she felt uncomfortable about the strange text, Us Weekly reports.

It seems that Braunwyn is currently on the outs with all of her RHOC co-stars. Fans will have to keep watching to see what goes down later in Season 15 to cause the rift.

While Gina Kirschenheiter wants Braunwyn gone, fans want Bravo to #fireKellyDodd. The Bravo show is just now showing the cast reaction to the beginning of the coronavirus pandemic back in March. In the last eight months, Kelly Dodd has made several controversial comments on social media about COVID. Her worst comment was saying that coronavirus is just “God thinning the herd.”

She has also posted several anti-masks tirades on her social media. Earlier this week, news broke that her mother was in ICU fighting COVID. However, just a few days later, her mom was spotted dining out in a restaurant.

While Kelly isn’t responsible for her mom’s behavior, many fans want Bravo to take action. So far, the network’s response has basically been “That’s Kelly being Kelly.” However, some fans think Bravo may have parsed down Kelly Dodd’s role in Season 15 due to the backlash.

What do you think? Should Braunwyn or KellY Dodd return for Season 16?