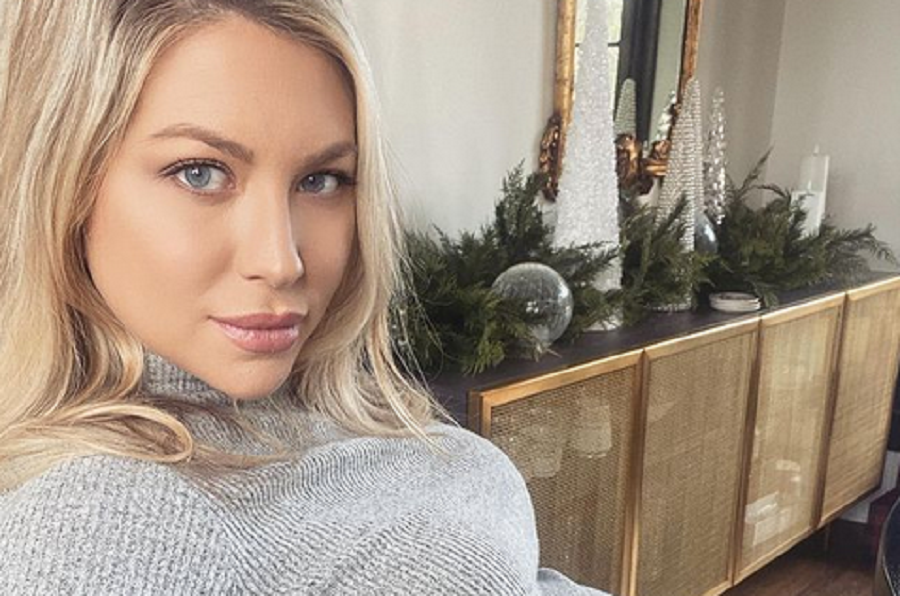 Stassi Schroeder is relatable. Like most people, the reality star had a tough year. Despite going through some major changes, she’s learned to practice gratitude. The former Vanderpump Rules star reflected back on the tumultuous year as she cradled her baby bump in a new photo with husband Beau Clark.

The parents-to-be are preparing for the birth of their baby girl. Stassi is due sometime in early January 2021. On Thanksgiving day, she took to Instagram to share another photo. The Next Level Basic author has been sharing a lot of photos and outtakes from her pregnancy photo shoot.

On Thursday, November 26, the former Bravo shared a new photo on Instagram. This time it included a shot of herself with her husband, Beau Clark, cradling her baby bump. Last week, Stassi shared many solo shots of her baby bump. In the caption, she wrote: “This obvs wasn’t my favorite year, but this is the first time I truly know the meaning of thankful.”

This comes after a difficult year for the Louisiana native. Back in June, Bravo fired both Stassi Schroeder and Kristen Doute from Vanderpump Rules. The decision was made after former castmate Faith Stowers shared her experience on the show. She claimed that the two reported her to the police for a crime she did not commit in 2018.

In addition, Stassi lost a series of endorsements. Her “Straight Up With Stassi” podcast also disappeared from Apple podcasts, Spotify, and Stitcher. It was a whirlwind week for the television personality. Just days later, Us Weekly broke the news that Stassi and Beau are expecting their first child together.

Despite the challenging year, Stassi Schroeder and Beau Clark got married in a private ceremony. The couple originally made plans to tie the knot in Rome, Italy. Of course, the coronavirus pandemic changed their plans. Ultimately, the couple settled on a small wedding in Katie Maloney and Tom Schwartz’s backyard in September.

“Today would’ve been our wedding day. We went and did it anyway,” Stassi announced on Instagram.

However, the blonde beauty still hopes for a destination wedding after the pandemic. “Hopefully Italian dream wedding oct 2021,” she added in the caption.

Stassi joked about having “no income right now”

Stassi Schroeder isn’t letting her firing get in the way of a shopping spree. As TV Shows Ace previously reported, she documented her and Beau’s trip to Target earlier this month. In his respective Instagram Story, both of them couldn’t contain their excitement.

“Alright, this is the first time that I’m going shopping in over nine months,” she told the camera. “I’ve never been more effing excited about anything. I don’t care if I don’t have any income right now. I’m gonna spend so much money, you have no idea.”

Her 40-year-old husband urged Stassi to “just go, go shop.” The couple was clearly excited to shop for the upcoming holiday season. Stassi continues to remind her followers that she’s super relatable. Do you agree with her that 2020 is your least favorite year?