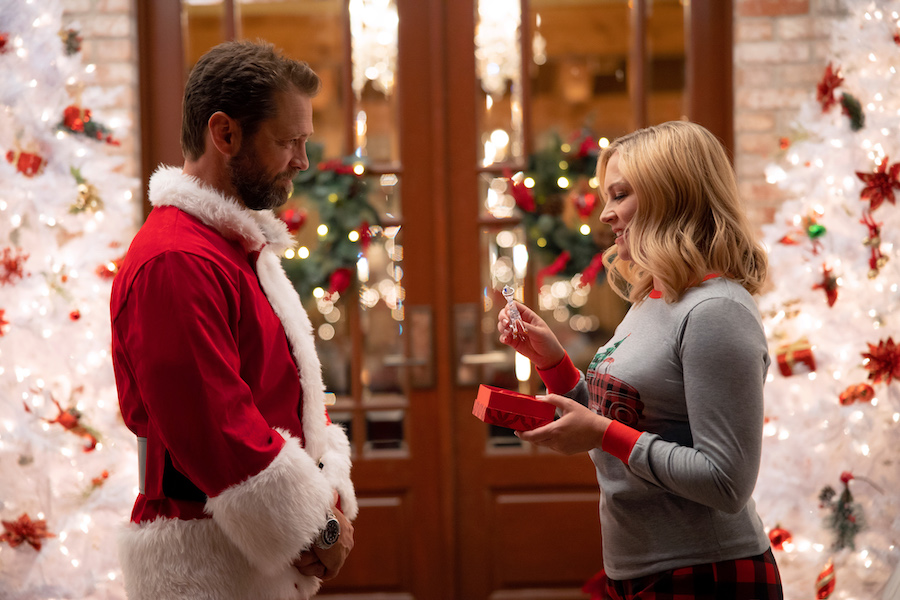 Are you ready for a very special It’s A Wonderful Lifetime holiday movie? Melissa Joan Hart (Melissa and Joey) and Jason Priestley (90210) star in the upcoming movie, Dear Christmas.

What Do We Know About Lifetime’s Dear Christmas?

According to Lifetime’s synopsis, Dear Christmas is a story about Natalie Morgan (Hart). She is host of the popular podcast Holiday Love, as well as a respected author. Natalie is an expert on romance, because she shares beautiful stories of holiday romances with her fans.

But, she has never experienced a romance herself.

Now Natalie is on a book tour. She is swinging over to her hometown in time for Christmas with her family. In addition, it is time to celebrate a milestone. Her parents are celebrating their Golden Anniversary. Fifty years together is amazing!

What is also amazing is that Natalie is finally in a romance of her own. She has met a sexy local firefighter, Jack (Priestley), and she is very happy.

Lifetime’s Dear Christmas includes a cornucopia of guest stars including Robin Givens, Ed Begley Jr. and Faith Prince. In addition, there are cameos by Married At First Sight’s Jamie and Doug Hehner, as well as One Tree Hill stars Hilarie Burton and Antwon Tanner.

You may recognize the song “25” is featured in Dear Christmas. This is 2010 American Idol finalist, Tori Kelly’s brand new song. She was just in the Macy’s Thanksgiving Day parade, on the Lifetime float, singing this new gem.

The singer went to Twitter and wrote, “YOU GUYS!! “25th” is featured in @lifetimetv’s new movie #dearchristmas that is airing TONIGHT @ 8/7c “#itsawonderfullifetime.”

As for Justin Priestley, this is his very first Lifetime Christmas movie. Of course, everyone knows Priestley as 90210’s Brandon Walsh. But, he has been involved in one Christmas movie, Fox’s An Assortment of Christmas Tales In No Particular Order.

Certainly 2020 has been a unique year in making Lifetime Christmas movies. According to Hart who spoke to MediaVillage,  they produced and wrote Dear Christmas with Covid in mind. If they wanted to film, they had to continue to work with safety in mind.

She further explained “You will never see more than six speaking roles in a scene. All the background people are from our crew, and you’ll see my character is always running into the ball late, or when everybody is gone, or about to have a party, or if there’s a party in the other room you can hear it, but there’s never any parties or things going on around us.”

It’s A Wonderful Lifetime is continuing now through the end of the year. In 2020, there will be a total of 33 new Lifetime Christmas movies!