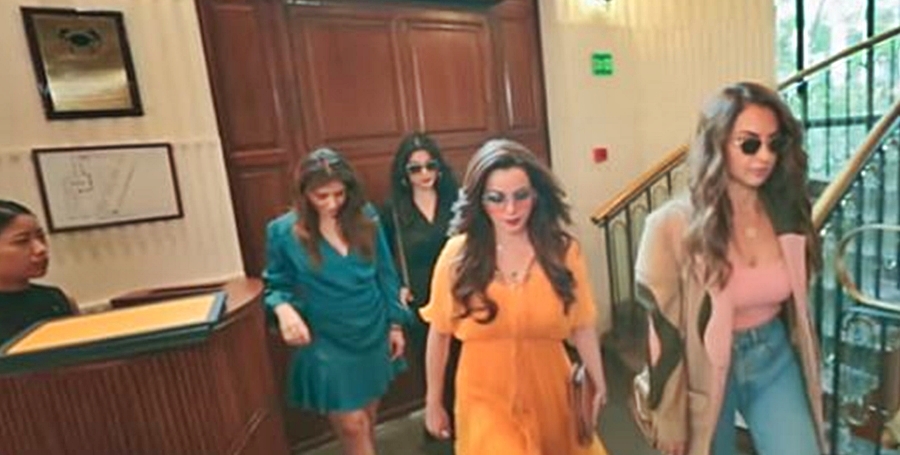 Fabulous Lives Of Bollywood Wives, Season 1 brings eight episodes. The Indian show follows the lives of famous women as they juggle professional lives, friendships and their families. And, the four women seem available to enjoy a lot of fun while they’re at it.

In the Netflix show, fans will meet Neelam Kothari, Maheep Kapoor, Bhavna Pandey and Seema Khan. They’re the wives of actors Samir Soni, Sanjay Kapoor, Chunky Pandey and Sohail Khan. Plus, guest appearances see Shah Rukh Khan and his wife Gauri Khan. Actually, they probably get way more fans than any American actors. Bollywood’s huge! Notably, The Hindu notes that the idea for the show originated in 2018 with an ambition to present something similar to the famous Keeping Up With the Kardashians.

In a press release, Netflix described the four women in Fabulous Lives of Bollywood Wives as “bound by a friendship that dates back 25 years.” Expect a lot of “sass and”outrageous fun.” Apparently, a fifth member of the gang, Gauri Khan, brings added fun for the wealthy women’s club. The trailer for the show dropped on November 13. And, you can view it below.

The series reveals that not every moment of the wives brings glamor and fashion. Luckily, curious fans see them going about their daily business. Interestingly, Bhavna Pandey suffers from a fear of ghosts. So, she says that sleeping alone terrifies her. Meanwhile, Maheep Kapoor can’t get her head around that. And, she literally keeps binoculars in hand and spies out the neighborhood.

Then, Neelam Kothari talks about people offering a re-entry into the movies. In fact fans of the show see something about that in the very first episode. Meanwhile in Episode 2, meet Seema Khan and explore some of her life as she juggles with life and work balance. Seema agrees that sometimes her life feels “ridiculous.” But often, they enjoy a “fabulous” life.

While American audiences might enjoy the show, on YouTube, many Indian viewers felt it in very poor taste. After all, in Indian millions of people lost their jobs during the lockdown. One unimpressed viewer wrote, “Thousands of people lost their jobs during pandemic and you’re showing this to mock them.” Others agreed that the timing comes over as “pretentious.”  After all, only a fraction of Indians could possibly imagine going “shopping in a Rolls Royce.”

Reality TV’s huge in the USA. So, the show might receive some happier reviews from this side of the big ditch. And, it really looks like lots of quips and funny things go down. Luckily, the show comes in English. Plus, if you struggle with their accents, Fabulous Lives Of Bollywood Wives also brings subtitles. Netflix viewers in the USA can start watching Season 1 on November 27.

Is Jade Roper’s Daughter Emmy Potty Trained Yet?
Why Was Lindsey Vonn’s Series ‘The Pack’ Canceled?
ABC Exec Confirms ‘Bachelor In Paradise’ Will Most Likely Return Summer 2021
‘MAFS’ Season 12 Spoilers: Is There a Baby on Board?
‘1000-LB Sisters’: Where To Watch The TLC Show