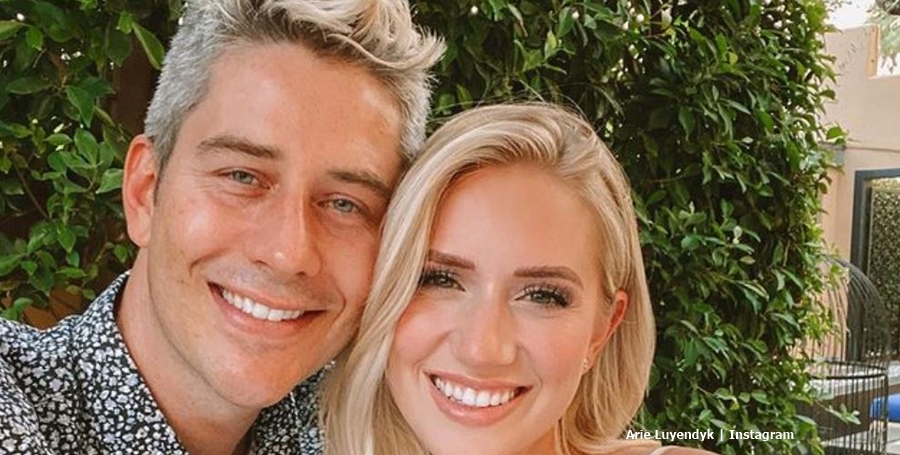 Arie Luyendyk and Lauren Burnham tried for another baby after she miscarried in May. But for the time being, it looks like the Bachelor alums set that aside for the moment. Arie revealed that he tested positive for COVID-19. So, they had a very quiet Thanksgiving, and he stays well away from their daughter, Alessi.

Recently, Arie shared about a giveaway on his Instagram. And, he shared about Lauren on her birthday. But fans noticed they seemed a bit quiet on YouTube and other social media platforms. So, on Thanksgiving, he told them why. Actually, Arie sounded a flu-ish in the short video clip that he shared. He said that he fell sick and tested “positive” with the virus about “nine days ago.”

Arie Luyendyk explained that he stays on a different side of the house from Alessi and Lauren. But, Lauren feeds him. They just celebrated Thanksgiving with no family or friends around. And, it looked like a rather sad celebration. The Bachelor alum sat very far away from Alessi and Lauren at their outside table. After the holiday, he hopes he gets the all-clear from the doctors. But, he admitted that experiencing the virus was “rough.”

Bachelor couple fortunate they live in a quiet place

We reported that “back in May, Lauren and Arie announced they had suffered the loss of her pregnancy.” At the time, they said that they felt super-excited about the new baby. And, they even bought their lovely new home to accommodate the addition to the family. Their new home looks really nice and it’s located in a quiet place. While they still hope for a little sibling for Alessi, at least they have plenty of space for Arie’s quarantine.

Actually, Arie Luyendyk noted they all do the right thing and quarantine. And, it looks like they spend a lot of time outdoors on their patio near the pool. While quarantine sucks, at least they enjoy a nice garden and some privacy. In June, Life & Style revealed some photos of their new home. The ABC stars “moved into a seriously gorgeous new home in Scottsdale, Arizona.”

Lauren and Arie look blissfully happy together. And in fact, they step up as another ABC success story. Mind you,  it didn’t always look that good for Arie. Recall, in Emily Maynard’s season of The Bachelorette, he only made it to runner up. He also got eliminated early in Wipeout: Summer Episode 7: Bachelors vs. Bachelorettes. In his own season of Bachelor, Arie chose Becca Kufrin, but later dumped her and rekindled what he started with Lauren.

Fans of Arie Luyendyk will probably be happy to hear that it looks like he recovers from his COVID-19. And, that they quarantined with care during his illness.