Anna Duggar took to social media to share a new photo of her family. The photo surprisingly features her husband, Josh Duggar. Longtime fans and critics of the family may recall Josh’s rocky past. Because of the backlash Anna typically receives about Josh, she doesn’t post many photos of him. But, maybe fans aren’t as harsh as they once were.

On her Instagram account, Anna posted a fall family picture of herself, Josh, and their six children. The family includes Mackynzie, 11, Michael, 9, Marcus, 7, Meredith, 5, Mason, 3, and Maryella, almost 1. The family is sitting on a blanket outdoors. Maryella is standing up in front of her mom, looking like she’s almost ready to walk.

The family’s outfits are coordinating in blues, whites, and browns. There are beautiful fall trees behind them and leaves on the ground around them.

Anna writes, “Many things are temporary, family is forever. Nothing can replace the precious time we spend with each other! ♥️” 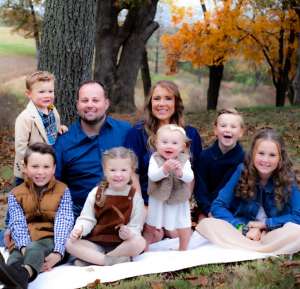 There are many fans of the Duggar family who are loving the new photo. They are happy to see all of the kids in the photo, as well as Josh. Many fans are commenting about how impressed they are with the photo because all of the kids are looking at the camera and smiling.

A handful of fans dislike how heavily edited the photo is. But, other than that, Duggar fans seem to be keeping things positive in the comments section this time around.

On her Instagram posts, Anna has her comments limited. This means that only certain people may comment on the post. This might include only the people who follow her or people who she follows too. The purpose of this is to keep the comments section kind and friendly, as many people who don’t follow Anna might come to her comments section and leave rude comments about Josh. So, she avoids that altogether by limiting comments.

This seems to help weed out some of the negative comments she receives, but there are always a few here and there. Fans don’t always agree with Anna for staying with Josh despite his rough history.

So, what do you think of the new family photo? Share your thoughts in the comments section below.