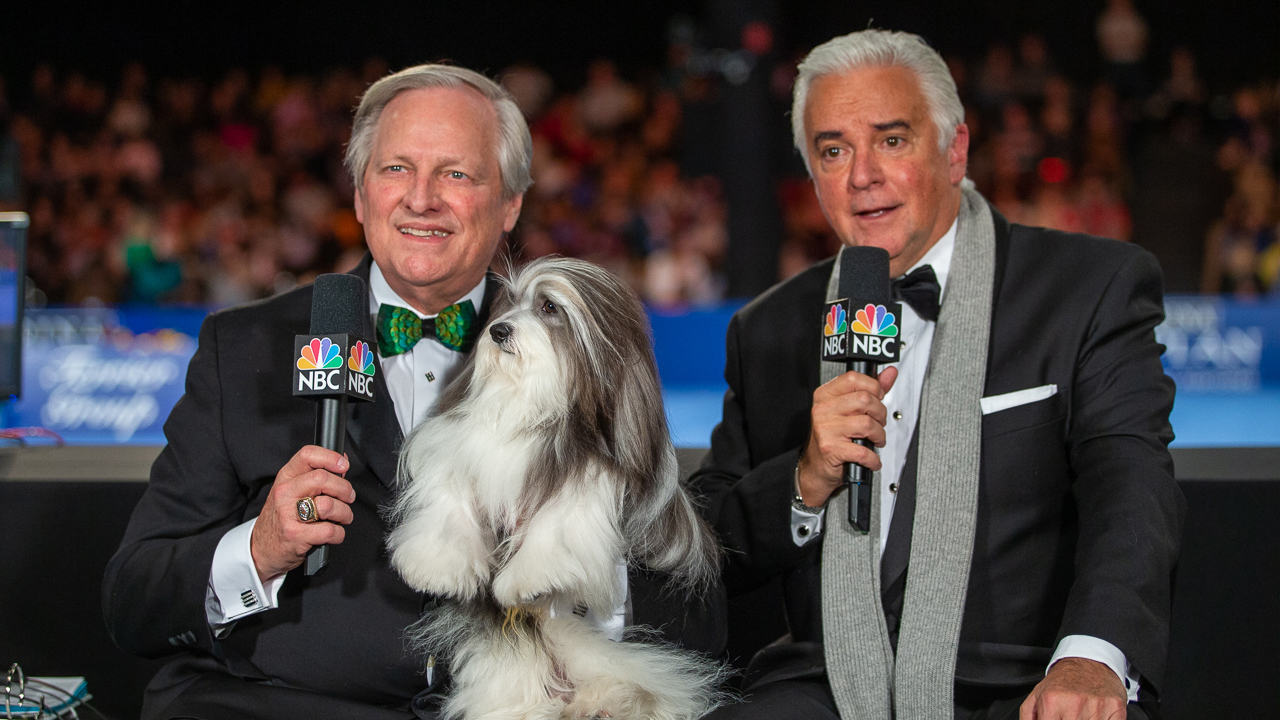 The event was filmed prior in November at the Greater Philadelphia Expo Center in Oaks, Pennsylvania. Mr. O’Hurley and Mr. Frei of the Westminster Kennel Club spoke with TV Shows Ace by videocall last week to talk about hosting this event in such a challenging year.

Committed to promoting the care, knowledge and enjoyment of the canine breeds, the two men discussed how the show will be produced a bit differently during this COVID pandemic. Fewer dogs are entered and the qualifier bar was raised as these dogs had to have been champions already.  The entire production was altered for the pandemic, including no live audience.

So, with that said, a small silver lining as for the first time in 19 years, these two men get to watch the four-legged fun at home as we the audience will enjoy it.

As the die-hard dog fans already know, each breed is judged against a standard of form and function.  Seven group winners will advance to finally determine the best in show. Champagne bottles will pop and extra treats for all will be had.

The Kennel Club of Philadelphia competition was done as a two-day show held on Nov. 14-15, at the Greater Philadelphia Expo Center.

Only officials, plus the NBC broadcast personnel and handlers and their dogs were on the premises. The judging followed the health and safety guidelines with social distancing and mask-wearing throughout plus temperature-taking and other cautionary measures were put in place.

New breeds at National Dog Show 2020 include the French Barbet, which competes in the Sporting Group. The Dogo Argentino which is classified under the Working Group, and The Belgian Laekenois which was entered in the Herding Group.

TV Shows Ace asked the two men, safely from their homes, about the new show.

What are the production challenges this year?

David Frei: There is a health and safety department that watches over that. In terms of their employees. We combine that with the protocols that come from the American Kennel Club and the rules from Montgomery county in Pennsylvania to make it safe and fun for everybody.

There will be anywhere from 25 to 30 plus breeds represented in the group competition which basically represents the function of the dog breeds in that group. And then we will be culling down to the best of the seven [that are] entered in the best of show competition. We will have fewer dogs this year, 500-600 dogs rather than 2000 this year because of that they will be champions only, we will be raising the bar of excellence.

David Frei: “Normally what we do is go back a week or two later to record voice overs in the production house at NBC in Connecticut. This year, we were kind of pioneers, we were on location [for another dog show]and taped it in Beverly Hills on February 29, but that was when the roof caved in.

So John and I—John from Beverly Hills and me from Oregon—we did the it remotely. I feel like we were pioneers in a way because we watched all the sporting events in the summer going on with that; we are doing the same thing and have done it that way once. It’s the new normal.”

John O’Hurley: “This will be the first time in 19 years that David and I have actually had a chance to enjoy Thanksgiving dinner under our own roofs and still being able to cohost the show together… and will be watching the same show that everybody else does, hopefully with their dogs on their sofas.”

What are the certain breeds that tug at their hearts?

John O’Hurley: “Over the years of the show, I was always pulling for the Irish Setter because I think it is such a beautiful and athletic dog …in the show with that beautiful auburn hair against the blue rug, it made for beautiful television.

However, I have fallen in love with one of America’s most popular breeds, the Golden Retriever.  That really wonderful look and the fact their dispositions are so kind and gentle and loyal… but they have never performed well in the show. So I am pulling for the Golden Retriever.

I feel its kind of like the [actor]Susan Lucci of breeds right now. it took poor Susan 19 years to win her Emmy [Award] and I feel its time for the Golden Retriever to step up into that winner’s circle as well.”

David Frei: “I have a [King Charles] Cavalier and also have a Brittany…We are of the orange and white family [laughs]… But my original breed [owned] was the Afghan Hound.

I always talk about watching the dog show and cheering your favorites. Maybe there should be a bit of the alma mater factor involved if you are sitting there watching the show with your Cavalier on the couch next to you, and maybe you should be rooting for those dogs, just like you are rooting for…oh I don’t know…like the Oregon Ducks! [O’Hurley laughs]

I just like to see the next great show dog who is coming along and its fun to watch.  It doesn’t really matter what breed they are, it’s not so much the dogs you have gone to see, but the dogs you walk away talking about who were at our dog show. That is a lot of the fun about watching this [event] on television.”

The National Dog Show is one of the most well known dog shows and is hosted by the Kennel Club of Philadelphia, and has been held annually since 1933.

The NDS is sanctioned by the American Kennel Club, and only purebred dogs registered with the AKC can compete. The AKC splits the competition into seven different groups.

Sadly due to the COVID-19 pandemic, the National Dog Show will be held without spectators, vendors, sponsors or media.

Judging will be done following strict safety guidelines, including social distancing, wearing masks and monitoring temperatures of all participants. Competition will be limited to 600 dogs, a 70% decrease from the nearly 2,000 who compete in a regular year.

Who else has won Best in Show at the Show?

Last year (2019), Thor the Bulldog beat out over 2,000 dogs representing 196 breeds and varieties recognized by the American Kennel Club to win Best in Show.

How Much Did Justin Duggar Pay For Home From Jim Bob?
Kim Kardashian Is Wishing Chicago A Happy 3rd Birthday
‘Seinfeld’ Star Julia Louis-Dreyfus Turns 60
Is Christine Brown Posting Selfies Of Someone Else On Instagram?
‘Sister Wives’ Fans Urge Christine Brown To ‘Tone Down’ Her Eyebrows