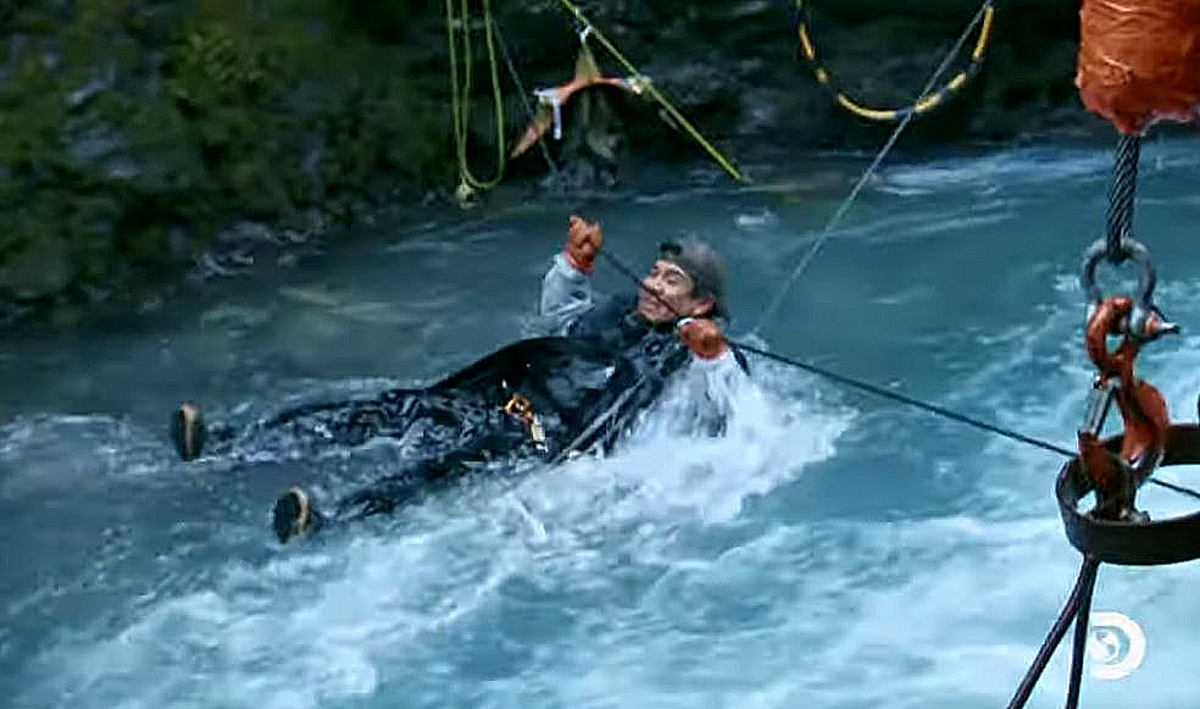 On the next episode of Gold Rush: White Water, Dustin Hurt is using Carlos Minor once again in a death-defying physical feat designed to free up a pathway to get to some gold.

Problem is, it means Carlos will be dangling about 80 feet from a raging waterfall where the water is just above freezing and jagged rocks mean certain death for Minor if his gear fails him, or there is human error on the team’s part as they manage his aerial “dangle.”

And in TV Shows Ace exclusive preview posted below, we see how Dustin Hurt is getting Carlos kitted up to travel on a wire into the raging river, as he is on the edge of the drop.

And if he does drop, there’s no surviving this.

Do we think Carlos Minor has a good life insurance policy? Hopefully for his family he does.  We are not sure why Dustin seems to select Carlos for all these hairy tasks that are life threatening.

On Friday night’s new episode on Discovery, we see how Carlos Minor, Dustin Hurt and James Hamm will battle the fastest and most violent rapids they’ve ever dove in. It’s a high wire act that will leave you breathless.

They must engineer a way to slow the rapids down for optimal gold dredging or risk being washed over the 80-foot waterfall.

In the preview clip, Dustin Hurt opens the action describing the ad hoc engineering that needs to happen as he says: “The water is coming down so hard right now we could barely dive in. It’s getting dangerous. What I need is large boulders piled up right there to lift the water and fill this spot up.”

We see that Carlos is outfitted to brave (and survive) the rapids if he is exposed in a fall. His job is to start moving boulders as the narrator says he will be placed: “…just feet from death’s door.”

And to put a fine point on exactly how dangerous this maneuver is, Dustin adds: “Right below us is this 80 foot waterfall and that is not something you want to
swim in, if you fall in there you’re dead.”

Gold Rush: White Water is extreme gold mining at the most challenging of locations. Gold miners Dakota Fred and his son Dustin Hurt are seasoned miners and they plan on making a fortune no matter the risk.

But to find the big gold nuggets and worthwhile payout, they’ll put their lives at stake and their crew to the test by diving deep beneath the raging waters of one of Alaska’s wildest creeks to the calmer and frigid “plunge pools.”

Watch to see if Carlos earns his paycheck once again this week as he is tasked to do another tough job: