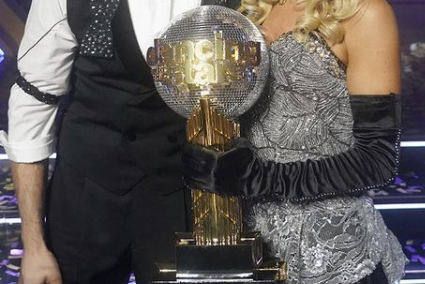 We’ve all seen some questionable dancers on Dancing With The Stars over the years. Each pro probably has their least favorite partner, but most castmates agree that there is one contestant in DWTS‘s 29 season run that takes the cake.

DWTS Isn’t For Everyone, But It Definitely Wasn’t For Master P

Master P competed all the way back in Season 2. However, he wasn’t the show’s first choice. They actually wanted his son, Romeo Miller. But when Romeo dropped out at the last second, Master P stepped up to fill his shoes.

But even so, Master P didn’t let the comments bother him.

“I knew people were going to make fun of me and laugh, but I say it’s worth it because I wanted to make sure that we brought that light and hopefully bring some of the people back together,” the rapper said in an interview after the season. “And it worked.”

Even though he had no chance at the DWTS Mirrorball Trophy, Master P wasn’t the first to go home either. He and his partner, Ashly DelGrosso finished in 7th place out of 10 couples. Cheryl Burke and Drew Lachey went on to win that season.

To get a glimpse of his performances, check out this video:

The Pros Weigh In

Season 2 champion Cheryl Burke commented that “Master P was the “worst dancer, hands down,” in an interview with Us Weekly.

In a separate Us Weekly interview, Witney Carson revealed she thought Master P and Kim Kardashian were the worst contestants.

“I know Kim Kardashian was really rough,” Witney confessed. She went on to say that Master P kept wearing the wrong shoes and refused to take his hat off.

So Why Did He Perform In The First Place?

DWTS execs always have a plan. Sometimes contestants drop out. The show knows this, so they almost always have a few backup celebrities on deck to take that person’s place.

For example, model Christie Brinkley was supposed to compete in Season 28. But she suffered injuries during rehearsals, so her daughter Sailor stepped in to take her place. Master P was more than willing to do the same for his son.

It’s widely agreed that Master P was the worst DWTS contestant. However, his heart was definitely in the right place.

And in case you missed the Season 29 finale last night, you should know that Kaitlyn Bristowe and Artem Chigvintsev took home the Mirrorball Trophy. They performed well throughout the season and many viewers predicted from the first night they would win.

This season, Carole Baskin and Charles Oakley were pretty rough. But do you think they were worse than Master P? Leave your ideas in the comments.