Adam Busby shared a snap of the OutDaughtered twins recently and Uncle Dale Mills dove right into the comments. Being a fan favorite of the series, is comment quickly accumulated nearly 100 likes. OutDaughtered fans agreed the quints (and Blayke) were lucky to have him as an uncle. And, we all enjoy seeing just how much he adores Adam and Danielle’s daughters.

Adam Busby shared a snap of the Busby twins enjoying ice cream cones together. Unsurprisingly, fans quickly took to the comments to figure out who was who. Despite Olivia and Ava being five years old, fans still have a hard time telling who is who. Olivia and Ava are identical twins in a set of quintuplets. So, it makes for some pretty confusing pictures for fans!

Any time Adam or Danielle post a photo of the twins, the “how do you tell them apart” comments never fail to follow. Fortunately, over the years, Ava and Olivia’s faces have formed a little differently. Some even believe their eyes on different sizes.

So, those who really hone in on the details have figured out how to tell them apart. Going off of this intel on how to tell Olivia and Ava Busby apart, we know Olivia is on the left and Ava is on the right of the picture below. 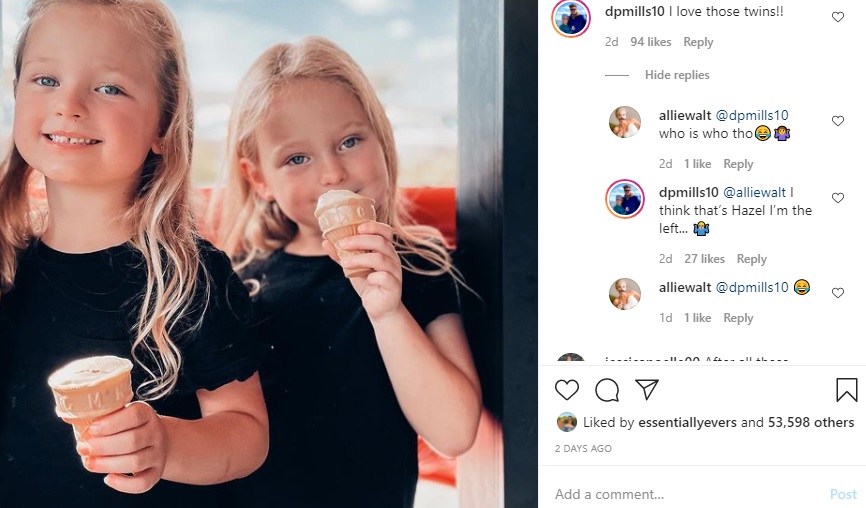 As you can see by the screenshot above, Uncle Dale Mills loved the sweet photo as much as the rest of the OutDaughtered fans who saw it. In fact, he gushed about how much he loved the twins in the comments.

Can he tell the OutDaughtered Busby twins apart?

Now, one Instagram follower responded to Uncle Dale Mill’s comment. It is possible they were just trying to figure out if he was able to tell the Busby twins apart. Or, it is possible they just hoped he’d clear up the confusion on which one was which. After all, Uncle Dale babysits the girls fairly often. Usually so Adam and Danielle can dump the girls and enjoy a date night together. So, he should be able to tell the twins apart right?

Unfortunately, Uncle Dale Mills has a very thick sense of humor. He’s rarely serious in the comments of Adam’s post. So, it isn’t too surprising he refused to give a direct answer.

In fact, he proceeded to jest he was in the photo with Hazel Busby. Chances are pretty good he can tell the twins apart. But, why spoil the fun for those playing the guessing game in the comments?

So, do you know how to tell Ava and Olivia Busby apart? Share your thoughts with us!