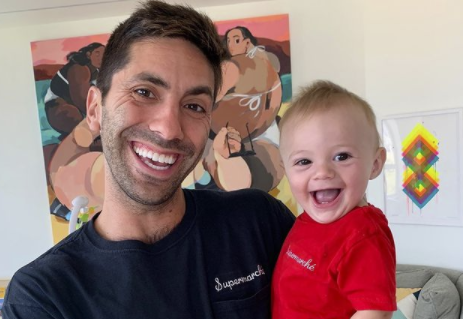 Back in the spring, Nev Schulman probably never imagined he would come in second place on Dancing With The Stars Season 29. In fact, earlier this year, Nev and his wife Laura only had one goal — staying alive. Both came down with the novel Coronavirus in the spring. It was an uphill battle, but they both finally recovered.

“It was really scary as there was so little information available and we were terrified that our kids would get sick too,” the Catfish host told ET. “For over three weeks, my constant fatigue, headaches and difficulty breathing was awful and the stress of wondering if my symptoms would worsen was horrifying.”

He went on to say that he could go back to cardio workouts by the summertime though. He also experienced Covid toes. In some Coronavirus patients, their toes become discolored and ached. Nev says his still bother him from time to time, but he doesn’t think it hurt his dancing ability.

Overall, Nev Schulman is just happy that he survived his encounter with COVID-19. Competing on Dancing With The Stars was a light in the middle of a very dark year.

“Looking back at the season of Dancing, and really reflecting on this year and all the things that brought me to this point, it just served as a really appropriate metaphor: how some things cannot be great and going poorly, but then an amazing opportunity will strike,” Nev continued. “Despite the tragedy of COVID, of course, in this pandemic, not filming Catfish on the road oddly opened up an opportunity for me to be in one place and be on the show. I am so grateful, and I just feel like that was something I wanted to share.”

Nev Schulman definitely became a fan favorite during his run on Dancing With The Stars. When ABC released the cast list, few people knew much about him. Most people had heard of him through Catfish, but couldn’t tell you much else. Fans made predictions about the final four early on, and few included Nev.

But after 11 weeks, everyone agreed that Nev and his partner Jenna Johnson belonged in the finale. One TV Line poll even predicted they would take home the Mirrorball Trophy. The competition was tight, but first place eventually went to The Bachelorette star Kaitlyn Bristowe and Artem Chigvintsev. Nev and Jenna finished in second, with Nelly and Daniella Karagach in third.

Now that Dancing With The Stars is over, what will Nev do next? He said in recent interviews that he would like to have another child. Stay tuned for more — we may have news to report on that very soon.