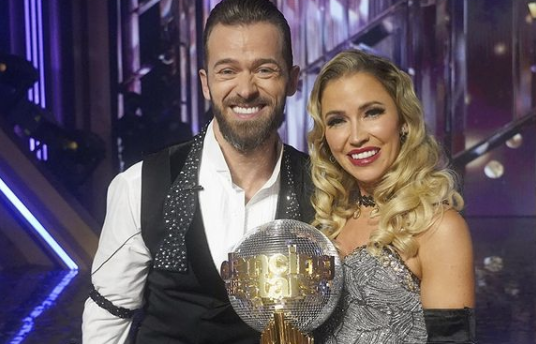 After an emotional 11 weeks, we have new Dancing With The Stars champions. For the second year in a row, a former Bachelorette took first place. Kaitlyn Bristowe and Artem Chigvintsev are your new Mirrorball winners!

ET caught up with the pair last night to talk about what winning the competition means to them. For Artem, it was a dream come true. This is his first championship, and he was even actually let go from the show before Season 28. Perhaps DWTS will keep him around now that he’s a first place winner.

“I was thinking about where I was a year ago, exactly. Where I was not a part of last season, how I felt that [my] old dancing dreams were done and dusted, and that I was never going to be able to perform on that stage at all,” the dancer told ET. “And then just standing with Kaitlyn in the final and being called as the champion of the season? I mean, it was such a surreal moment that I never thought it would be, in the reality of this world.”

Meanwhile, Kaitlyn Bristowe had DWTS dreams for ages. The show actually asked her to compete in a previous season. She happily agreed. However, she had to drop out because she was still under contract with The Bachelorette. Competing this year meant everything to her.

“I don’t even know how to put it into words,” Kaitlyn reflected. “But to me it’s like, if you believe in something and if you have a passion or a dream … when you think of anyone who’s gotten somewhere, I guarantee they have a story about what it took to get there.”

Dancing With The Stars may be over for now, but the competitors still have lots to do. Kaitlyn Bristowe previously teased that an engagement could be on the horizon.

She said she definitely did not want another televised proposal, but she expects one is coming soon. Now that she has the Mirrorball, all she needs is a ring. Stay tuned — we will probably have news to report on that soon.

Meanwhile, Artem is looking forward to reuniting with his family. He has a baby son at home, and it can’t be easy for the new father to be away for so long. He and his partner Nikki Bella are going to start couple’s counseling, and the family also has plans to move to Napa.

What did you think of this season of Dancing With The Stars? Will you tune in for Season 30 next year? Let us know in the comments.

‘Unpolished’ Exclusive: Lexi Martone Hates Online Dating And Is Done With Joe
Nikki Bella And Artem Chigvintsev Are In Couples Counseling — How Is It Going?
‘The Bold And The Beautiful’ Actress Denise Richards Has A New Movie Role
‘Sister Wives’ Fans Remind Mykelti To Check Out Dolly Parton’s Imagination Library
’90 Day Fiancé’: Paul & Karine Cross The Line With OnlyFans