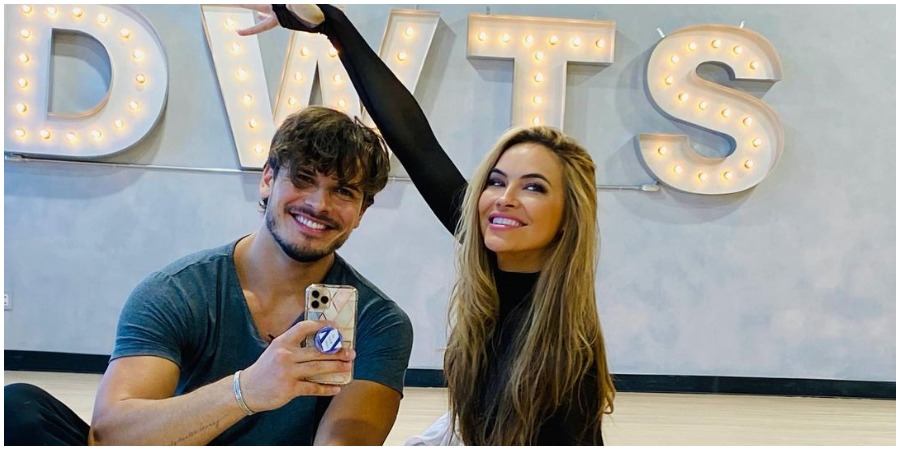 Dancing With The Stars brought back many of their most popular couples for the big finale on Monday night. One of those couples were Chrishell Stause and her partner, Gleb Savchenko.

The duo were spotted on set together for the finale. They stood in the balcony together with other castoffs such has Johnny Weir, Jesse Metcalfe, and AJ McLean as they cheered on the finalists.

Before the show, Gleb took to his Instagram account to share a selfie he’d taken with Chrishell. In the caption he gushed over his former dancing partner, reports People.

“Happy to have my partner back in the ballroom with me one last time! I’m grateful for your friendship Chrishell. #TeamSellingIt @dancingabc.”

‘Dancing With The Stars’ Most Talked About Couple

Chrishell and Gleb’s chemistry on the dance floor was electric throughout their Season 29 fun. The pair danced beautifully together, and made relatively far in the competition. They were kicked off just before the semi-finals.

Following their exit from the show, the rumors began to run wild. Gleb announced that he and his wife, Elena Samodanova, were calling it quits after 14 years of marriage. Fans immediately began to speculate that his relationship with Chrishell could be to blame for the end of his marriage.

Elena later revealed that it was her husband’s “ongoing infidelity” that caused their split. This only intensified the rumors that the dancing pro may have cheated with Chrishell.

The rumors heated up so much that Gleb decided to speak out and defend Chrishell’s honor.

THANK YOU to everyone that voted because this experience has been so meaningful and truly so special. I felt my parents with me last night and that’s a priceless feeling I will absolutely never forget. 🙏🏼 #DWTShttps://t.co/Tl6xyydlpX pic.twitter.com/JFLzkCbCoF

“While I will continue to respect the privacy of my family, I will not stand by and allow false accusations and internet rumors go unaddressed. My relationship with Chrishell was and remains strictly platonic. Our friendship during our season on DWTS was not the reason for our split. Elena and I have had longstanding issues in our marriage. This has been an ongoing situation between Elena and I paired with poor timing,” he stated.

“I am so saddened about the news of Gleb and Elena’s split. It is unfortunate that this has caused rumors to swirl about my personal life,” she wrote.

On Monday night, Chrishell and Gleb looked happy to be back in the ballroom as they watched the finals. Contestants Kaitlyn Bristowe, Nev Schulman, Nelly, and Justina Machado all fought hard to win the mirror ball trophy.
Justina ended up in fourth place, while Nelly took home the third spot. Although, Nev had scored the most consistently high scores throughout the season, it was the former Bachelorette star, Kaitlyn Bristowe, who ended up winning it all at the end of Dancing With The Stars Season 29.