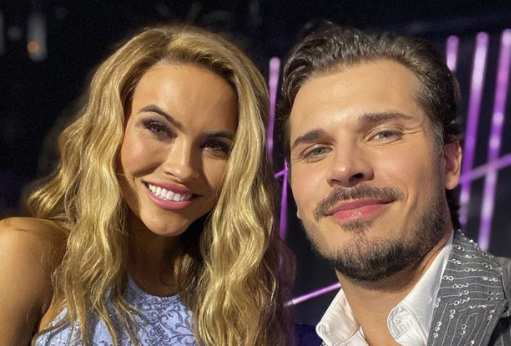 No one likes being gossiped about, but Selling Sunset star Chrishell Stause has had enough. All season long on Dancing With The Stars, fans speculated there was something steamy developing between her and her partner, Gleb Savchenko. And to make matters worse, Gleb publicly announced he and his wife were divorcing just days after he and Chrishell left the show. Rumors ran wild, even though Gleb and Chrishell both said they weren’t romantically involved.

“I feel like it really is annoying because it’s one of those things where, you know, unfortunately, the timing of what he’s going through personally, people want to make it into something it’s not,” Chrishell said on E!’s Daily Pop. “So, we’re just friends.”

But of course, fans pointed out that’s what anyone entangled in a torrid love affair would say. Chrishell adamantly feels that fans misinterpreted their relationship on the dance floor. And things definitely got worse once Gleb’s ex Elena spoke to the press and accused him of cheating.

“Our friendship during our season on DWTS was not the reason for our split,” Gleb told Us Weekly. “Elena and I have had longstanding issues in our marriage. This has been an ongoing situation between Elena and I paired with poor timing.”

Perhaps it was poor timing. But Gleb was the one who spilled the beans about the breakup in the first place. Did he really need to post about it on Instagram just days after his time on DWTS ended?

But What Really Happened?

It’s hard to know exactly what to believe here. Gleb’s ex-wife says one thing, and he and Chrishell say another. Anonymous sources say that Gleb and Chrishell definitely had a flirty relationship on the show. However, friends say the rumors are just rumors. Chrishell’s Selling Sunset co-star Amanza Smith believes it’s just a publicity stunt.

“Poor Chrishell,” Amanza said on FUBAR Radio recently. “She was like, ‘I went through a very public divorce. Like, the last thing she would ever do is add to somebody’s infidelity if that’s what was going on.’ But that’s just how it goes when you are in the spotlight, but I think she’s pretty pissed off about it. … It sounds like maybe the wife is using this as, like, a cheap PR stunt.”

Even so, both Gleb and Chrishell appeared on the Dancing With The Stars Season 29 finale. They came to cheer on the final four. Kaitlyn Bristowe and Artem Chigvintsev ultimately took home the Mirrorball Trophy.

No matter what rumors the fans come up with, Gleb Savchenko and Chrishell Stause seem determined to keep their friendship alive. But what do you believe? Is there a budding romance there, or is it another wild rumor? Leave your ideas in the comments.