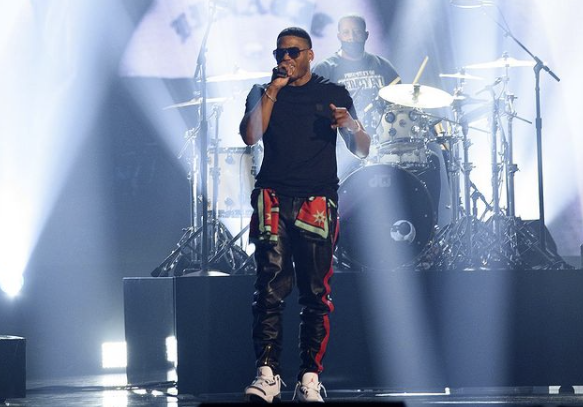 Grammy winner Nelly performed at the American Music Awards last night, delighting fans everywhere. He performed a medley of his greatest hits and celebrated the 20th anniversary of “Country Grammar.” He continued with other hits, “E.I.” and “Ride Wit Me.” Fans really enjoyed the night of nostalgia.

Nelly Has No Problem Juggling Such Big Performances

If fans missed Nelly on stage last night, they can catch him again tonight. The rapper is competing in the Dancing With The Stars Season 29 finale, but he’s also going to sing. He recently sat down with ET to discuss how he managed to juggle so many big performances in just a few days.

“There’s no extra pressure. That’s definitely Nelly’s comfort zone, I could do that in my sleep. For DWTS, I don’t know quite yet which songs I’mma do, we’re still figuring that out, but we’re definitely gonna Nelly it up,” he told reporters. “And hopefully I can get a lot of great energy from these pros and a lot of the dancers to help me out. We’ll see if we can have a fun three minutes and some change.”

While Nelly sings, his partner Daniella Karagach will perform a dance routine with her husband Pasha Pashkov.

If you’re eager to see Nelly and Daniella dance together, you’re in for a treat. They’re going to repeat the Samba they performed on 80s night to “Rhythm of the Night” by DeBarge. This is one of the first routines that really captivated the audience’s attention. Afterward, they will perform their freestyle routine to “Savage” by Megan Thee Stallion and “Hypnotize” by The Notorious B.I.G.

Win or lose, it’s going to be a spectacular evening for Nelly and his fans.

The Rapper Has Big Plans After DWTS Ends

But don’t expect Nelly to go away after the competition ends. Nelly is headed to the silver screen. There are plans for a new Buddy Holly biopic called Clear Lake. Nelly has been cast as rock and roll legend, Chuck Berry.

We know Nelly can sing, he’s learning to dance, but can he act? If he can successfully pull off his role in Clear Lake, Nelly will definitely be a triple threat. He already appeared in a few minor television roles. We’ll just have to wait and see what happens.

We don’t know much about the production schedule for Clear Lake yet. But it will probably be a while before it comes to theaters, due to the pandemic. But we do know a few other big-name actors are joining Nelly on the screen. Ruairi O’Connor, Diane Guerrero, and Colin Hanks are just a few other Clear Lake cast members.

Don’t forget to tune in to the Dancing With The Stars season finale tonight! Let us know if you’ll be voting for Nelly in the comments.