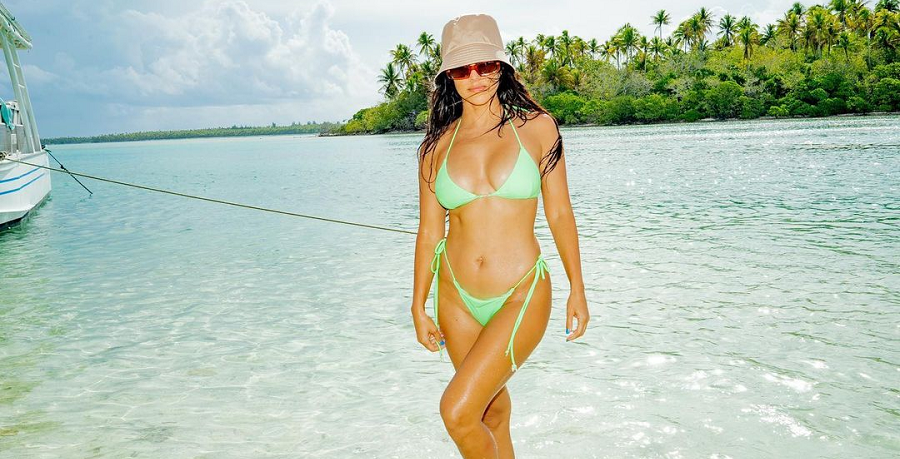 Not over Scott? Kourtney Kardashian put on a busty display on Instagram. But it’s not just the photo that has fans talking. It’s her caption that has them wondering if she’s not happy with Scott moving on.

The Keeping Up With the Kardashians star posted a series of rare photos. The 41-year-old snapped photos from inside her walk-in closet. In the sexy photos, Kourtney showed off plenty of cleavage as she posed in various stages of undress. The Instagram post comes on the heels of Scott’s new relationship with Amelia Gray Hamlin.

As TV Shows Ace previously reported, Lisa Rinna and Harry Hamlin somewhat support this new relationship. As for Kourtney, does she have a problem with it?

Kourtney Kardashian shows off her bust in new photos

The Poosh founder attempted to get dressed in her walk-in closet. On Friday, November 20, Kourtney Kardashian posted a series of sizzling photos. She wore a black blazer over a dress with a plunging neckline. Her cleavage was on display. Kourtney also wore black sheer gloves and black pantyhose.

“No ok,” Kourtney captioned the post. It received over 1.45 million likes. However, it’s unclear what Kourtney was referring to in the post. Was she uncomfortable with the fit of her outfit? Or, was this a response to Scott dating another 19-year-old girl? Many of Kourtney’s fans assured her that she looks fine to them.

Scott has been making headlines after he was spotted with Lisa Rinna’s daughter, Amelia Gray Hamlin. The two looked cozy during their beach trip in Southern California. The teenage model wore a tiny bikini. Scott and Amelia were lost spotted together at a Halloween party.

What does Kourtney really think?

New reports indicate that Kourtney Kardashian doesn’t care about her ex-boyfriend dating another 19-year-old. In fact, she’s happy that he’s dating someone new. She feels that his parenting skills improve when he’s in a good relationship. Sources told TMZ that Kourtney has “no issue” with Scott and Amelia’s relationship.

No matter his relationship status, he’s being a good dad to their kids – Mason, Penelope, and Reign Disick. The insiders claim that she loves it when he’s dating new people because “that’s when he’s the most grounded, happy, and responsible as a parent. That’s how the family saw him when he was dating Sofia, and it’s the same way now that Amelia’s in his life.”

The source also told the outlet that Kourtney and Scott are on “the best terms they’ve been in a long time.” She doesn’t want to get involved in his new relationship. But that hasn’t stopped the internet from talking about Scott and Amelia. They think it’s weird for the 37-year-old reality star to consistently date younger women.

What are your thoughts on Scott and Amelia’s relationship? What did you think of Kourtney’s photos? Sound off below in the comments section.

‘LPBW’ Jackson Roloff Has What It Takes For His Own Show?
Jedidiah Duggar Packs On The Pounds, Katey Nakatsu To Blame?
Wait, Was Anna Duggar Just Spotted For First Time After Josh’s Arrest?
Todd Chrisley Reveals His Vision Is Now A Reality
Jana Duggar & Stephen Wissmann’s Wedding Details Leaked