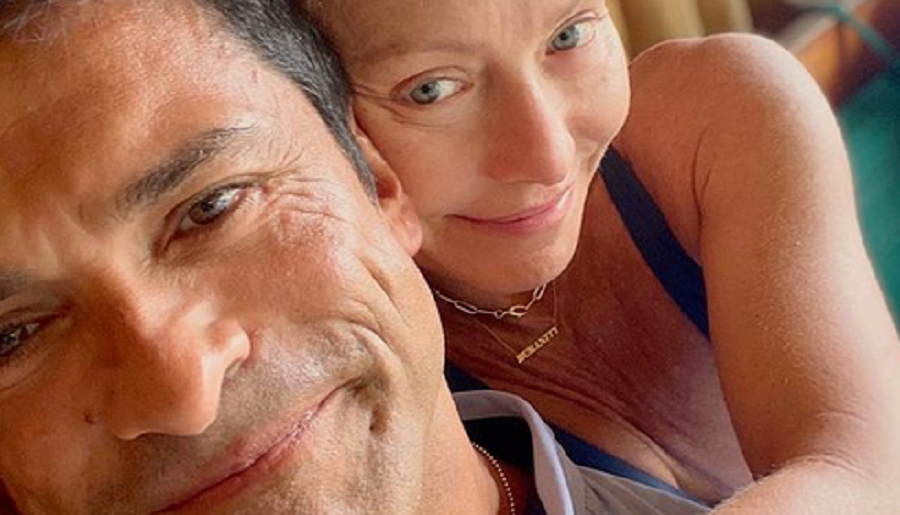 Kelly Ripa and her husband Mark Consuelos are in a long-distance marriage amid the coronavirus pandemic. The Live With Kelly and Ryan host admits it hasn’t been easy. They’re struggling with being apart since the Riverdale actor works in Vancouver and Kelly works in New York.

The couple hasn’t seen each other since August. Canada has a strict quarantine policy in place. Despite the long-distance, the two are trying to make it work. Thanks to the power of social media, they’re able to connect. Kelly shared the sweetest way they’ve been keeping in touch.

On Saturday, November 21, Mark Consuelos took to Instagram to share a photo of himself with Kelly Ripa. In the caption, he wrote: “#fbf missing my date nights with sexy…” Kelly took to her husband’s post to share that she’s missing him too. She simply commented: “Soon ish” with a red heart emoji.

The hunky actor responded to her comment with four heart emojis. Fans posted encouraging messages to the couple. “Not soon enough,” one fan wrote. “You guys are awesome and so realistic,” another added. “A couple more than perfect,” a third commented. Mark posted the photo a day after Kelly shared a throwback photo of them from 2014.

In the throwback post, Kelly Ripa wore her signature blonde bob. In the comments section, fans said how much the style suited her then.

“Miss the bob. Cut it back,” one fan commented.

“I like your hair short!! Pretty either way!!” another added.

“Love your hair length!” a third added, while a fourth said: “Love that haircut on your!! Takes years off.”

Kelly previously told SheKnows that their separation has been difficult on her. And she’s not the only one who’s missing Mark lately. Kelly revealed that it’s been difficult on their three children as well. She also shared their plans for when he returns.

“It’s just going to be a reunion, really for us – the kids and me and Mark,” she told the magazine. “And it really will be a celebration. We miss him terribly.”

It’s refreshing for a famous couple to show the struggles of their long-distance marriage. Most Hollywood couples tend to shy away from that. Sometimes these picture-perfect marriages aren’t as easy as they appear.

The daytime talk show host revealed she’s had “enough” of 2020. The comments were in reference to the pandemic. Kelly and her co-host, Ryan Seacrest talked about the holidays. Ryan said he’s ready to put up his Christmas tree just to enjoy some holiday cheer.

“I think we’ve all agreed to put up our trees early honestly because it’s enough already,” Kelly said. “We’ve all had enough.”

This comment comes after fans feel she’s been exhibiting “extreme” behavior on the set of the show. Some fans think Kelly was addressing the comments indirectly while also calling out 2020. Concerns over Kelly’s behavior circulated earlier this month on social media. Some think she’s been “hyper” and “over the top” lately.

Maybe Kelly is just under stress. This year has been difficult for everyone. And it’s clear that she’s missing Mark.