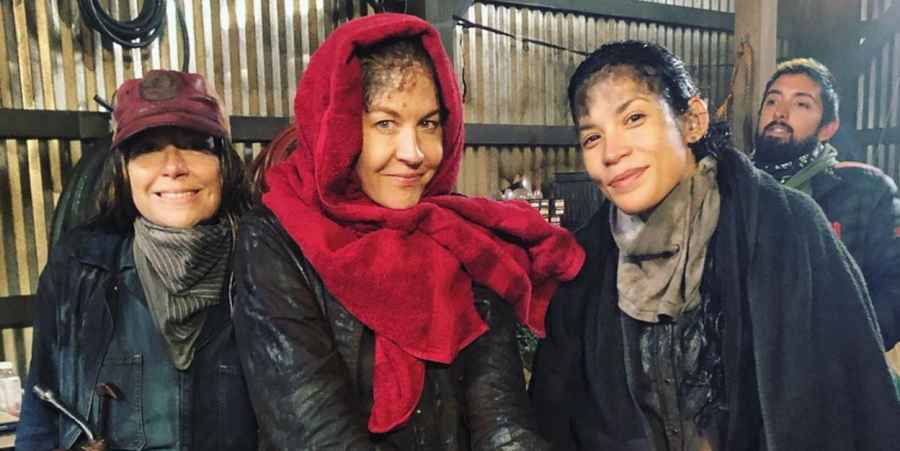 Season 6 of Fear the Walking Dead was pretty slow up until the latest episode.  However, episode by episode, the excitement is starting to build. The latest episode is when all hell breaks loose with a chilling situation. The scenes involve Alicia (Alycia Debnam-Carey), Dakota (Zoe Colletti) and Charlie (Alexa Nisenson). This involves the girls being trapped in an old hunting lodge with a crazy taxidermist. While the scary situation did result in some of the most exciting walker attacks yet on The Walking Dead spinoff, the episode also revealed a missing character. We finally find out what happened to Grace (Karen David).

Besides the grueling scenes in the hunting lodge, this was an episode where all the friends start coming together again. Morgan has a new hideaway and is looking for everyone to move them to safety. Up until now, Al (Maggie Grace) and Dwight (Austin Amelio) are holed up in the new hideout.

Strand arrived on the scene too but decided he didn’t want to stray from his original plan. However, it is in the final scene of the midseason finale that viewers learn about Grace’s whereabouts, along with Virginia’s newest plan.

What happened to Grace?

The episode didn’t fully explain everything that has happened to Grace since we last saw her in Season 5. However, we now know that Virginia (Colby Minifie) has held her captive for an undetermined time. Grace looks relatively comfortable, with a comfy bed and a book to read, so Virginia is treating her better than most.

It doesn’t look like she is being kept in a jailhouse, as such and the room is well hidden. A locked and guarded gate gives access to the door to her cell, which is blocked by a set of shelves. It seems keeping quiet about Grace’s whereabouts is important to Virginia. It looks like she has been hiding the pregnant woman as a secret weapon against Morgan, should the time come. Now could quite possibly be that time.

It doesn’t seem likely that Grace plays any other role in Virginia’s communities. If she did, news of her presence would surely have reached Morgan.
So, after a slow beginning, we finally see plenty of action, only to stop for now with the break. As noted by Cinema Blend, fans will now have to wait until after this midseason break, for the next episode to air at some time in 2021. In the meantime, AMC will air the two-part season finale of the spinoff The Walking Dead: World Beyond, on Sunday, November 29 at 9 pm ET on AMC.